A few weeks ago, as I was driving down the road after leaving my parents' house, a neighbor's dog ran right in front of the car. I hit the brakes and without thinking said "sh*t!" Except I didn't use an asterisk.

Normally, I ignore it when they pick up a foul word and just hope it is never repeated again. But they just kept saying it.

So, like any good Mom (sarcasm), I lied to them.

They both said "Ooooh, Shook." Clearly, they had just misunderstood me.

I wiped my brow and patted myself on the back. The sh*t crisis had been averted and I didn't have to worry about them yelling it in the middle of Wal-Mart.

But now every time we drive by that house with the dog, they both ask: "Where's Shook??"

I let the guilt sink in and reply with "Oh, he's probably sleeping!"

"Do you want a cupcake, a muffin or a cake?" 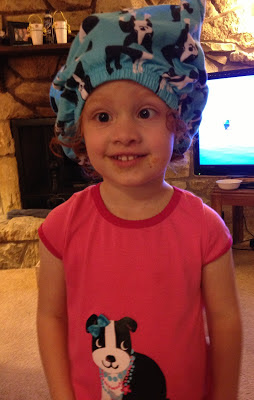 She came downstairs looking just like this and asking that question. Can you guess what her profession is?