This month was, unfortunately and sadly, defined by illness. It started as a runny nose that led to difficulty breathing through your nose, which led to extreme misery. And that was just the first two days. It eventually turned into a double ear infection, which led to intense misery. Suffice to say, there was a lot of misery. 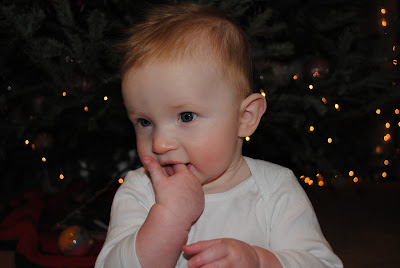 But we survived! And the silver lining? We snuggled for pretty much 48 hours straight. Which did have the unfortunate consequence of making you feel like you now have to be rocked before you can go to sleep, but that had the fortunate consequence of me knowing just how wonderful it is when you gently rest your hand on my cheek as I rock you to sleep. And that, my dear son, is worth all the arm aches and back pain.

The illness lasted for about half of the month and the other half? Smiles. All smiles. 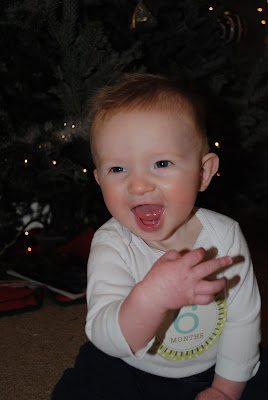 And chewing. Lots and lots of chewing. 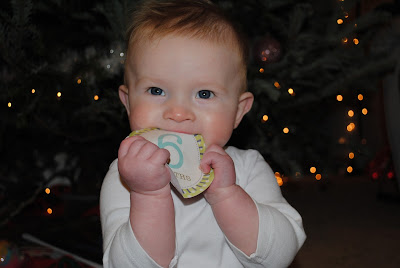 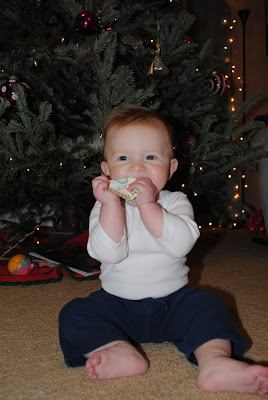 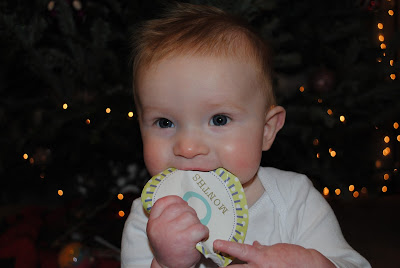 You also figured out rolling both ways, which led to a bit of mobility, which led me to step up my baby-proofing game.

You haven’t been interested in baby food yet. I’ve tried several times and each time you give me this look of total and utter disgust and then clamp your mouth shut and refuse to try another bite. We’ll keep trying, but I’m not worried. 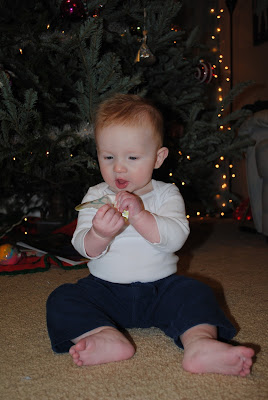 I know I’m a bit behind this month with your letter. December is busy for most everyone, but add in two birthdays and it’s just shy of chaos around here. Add in a six-month-old baby and you have complete chaos.

And we’re loving every minute. 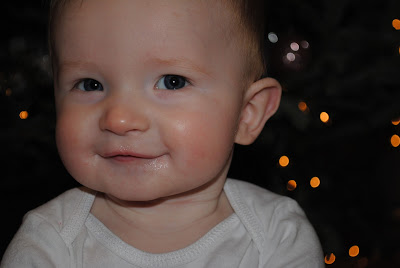 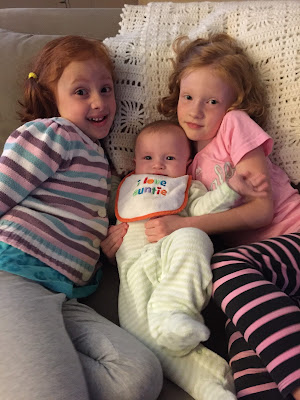 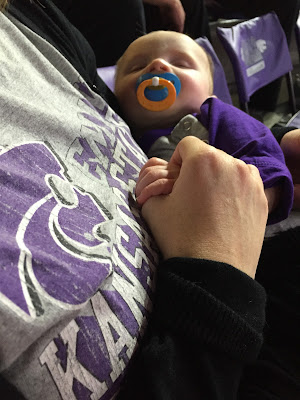 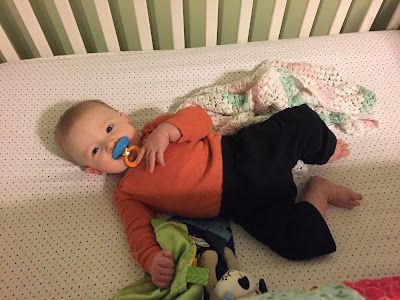 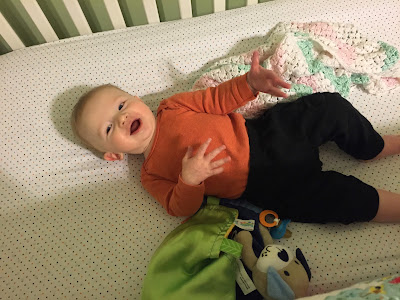 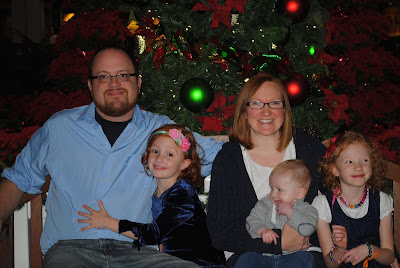 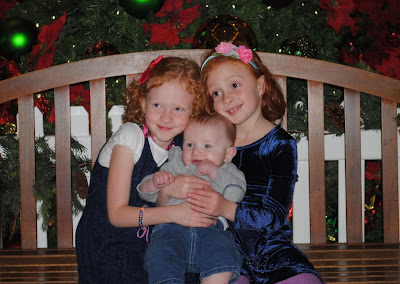 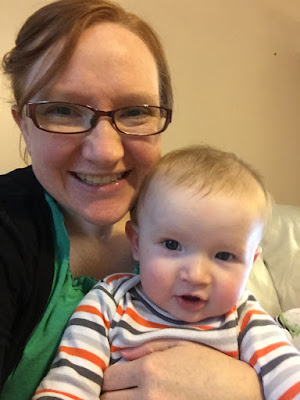 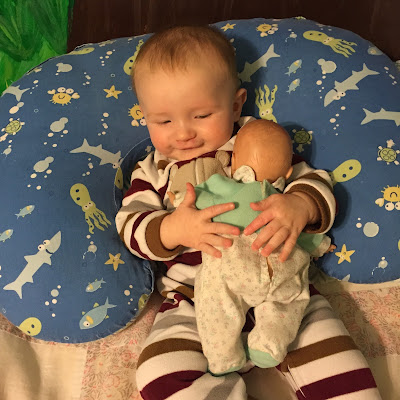 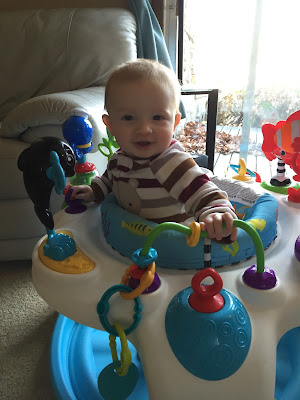 The Search Has Ended

We called on you and you answered the call.

You searched your collections. You asked your friends. Your neighbors. Your family.

You posted it on Facebook and continued to spread the word.

Yesterday, I received a small package. Inside it contained joy. Pure, unadulterated joy (in the form of a soft, gray kitten). It was from a family I have never met. A family whose compassion and generosity inspired them to help Santa fulfill a little girl’s wish. 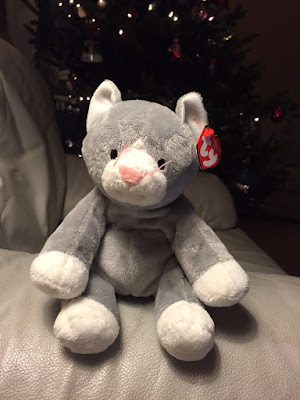 In less than 10 days we will get to watch that little girl’s face as she sees her best buddy under the tree. I can’t wait.

Thanks to every one of you who helped Santa with his search. Y’all are certainly on the nice list.
Posted by Katie at 10:15 PM 0 comments

The Search for Rocky

Three years ago nearly to the day, Claire wrote a letter to Santa in which she asked for “a cat and a choo-choo for the cat to go in.”

Three years ago on Christmas Eve, Santa ran from store to store, searching for a stuffed animal cat. You see, Santa waited until the last minute because how hard could it be to find a stuffed cat? Harder than you think. Nothing at Target. Nothing at Wal-Mart. Nothing at the mall. Nothing at the various dollar stores. No stuffed cats to be found. And businesses were starting to close. Panic was setting in.

So, Santa tried one last place — Hastings. The most unlikely of places to find a stuffed animal. But way in the very back of the store was a rack full of stuffed animals. And in it sat, Rocky. The softest, most cuddly little gray stuffed kitty.

And on Christmas morning, one sweet little three-year-old girl found a soft, cuddly gray kitten under the tree. 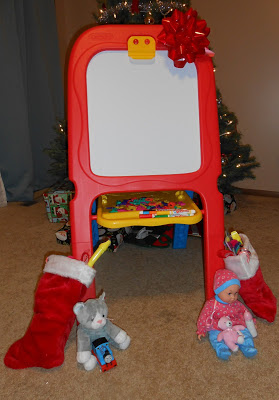 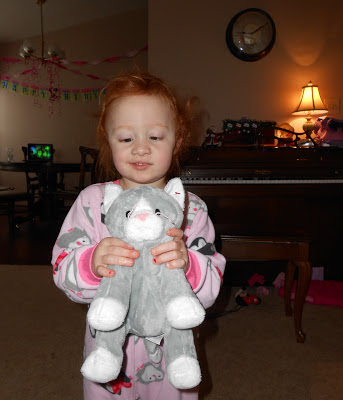 In the years to come, there would be other stuffed animals. Freckles. Little Horsey. Jake. Rose. Cubby. All of these were special, but none ever took Rocky’s place as best buddy.

Rocky went everywhere with Claire. To sleepovers and restaurants and camping. In just about every car ride. He stayed with her during her eye surgery. And he was misplaced a time or two. We once found him in the microwave of the play kitchen and once balled up in the play tea kettle. He was good at hide and seek. 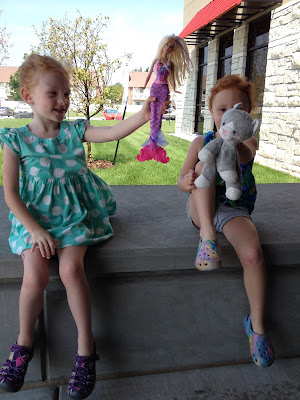 But he was always found. Until this summer.

Rocky’s last known location was at the hospital when Henry was born — he was so special, he accompanied Claire to the first time she met her baby brother. 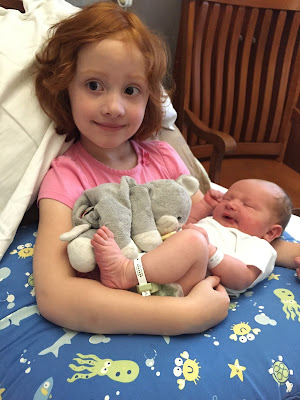 The days and weeks and months after that were a blur of baby cries and sleep deprivation. Rocky’s absence wasn’t noted until a few months down the road.

We searched high and low, but could not find that sneaky little buddy. We looked in microwaves, tea kettles, cars, purses, overnight bags, under beds, in drawers — still no Rocky.

Last night, as we are writing our letters to Santa, Claire dictates the following:

Dear Santa,
Do you know the Rocky you gave me three years ago? I lost him by accident. Will you give me another cat like Rocky?

And so Santa’s helpers (Scott and I) began the search and pled with any friends or family members who might know of another Rocky. Friends from all over joined the search. They asked their friends and those friends asked their friends. And although this particular cat seems to be of the most rare variety and very hard to find, I sat down last night and couldn’t help but smile.

Some day I will tell Claire of the great lengths so many friends and friends of friends went to to find her another Rocky. People she has never met before trekked to their basements and searched through totes of beanie babies to see if Rocky was among them. They called on family members to do the same. From Kansas to Illinois to Minnesota, people were hunting for a Christmas miracle.

And although we didn’t find the cat, that kind of spirit and compassion is a Christmas miracle all on its own.
Posted by Katie at 1:41 PM 0 comments