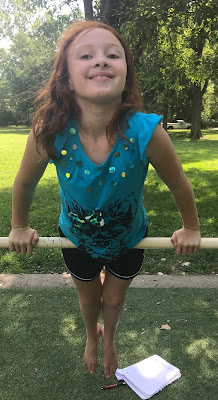 You know how they say you learn something new every day? Here’s my big one for today.


Claire told us yesterday that her class was preparing to have an in-class spelling bee, which would determine who from their class would move on to the next round of the spelling bee. I was pumped for her and immediately whooped and put my hand up for a high five.


Confused, I slowly put my hand down. Claire is like every other human in the world: a complicated mix of exceptional talents and flaws. But, by far, her super power is words. From a very young age, words just made sense to her. She can spell hard words she’s never seen before because she has a rich understanding of how our language uses sounds. She can take what she knows from one word and apply it to another based on the sounds. In other words, she’d totally nail the spelling bee. It’s meant for kids that just get words. It’s meant for kids like her. But not actually her.


I tried to ease my way into convincing her to do it. She hates being in the spotlight, so I thought fear of winning was preventing her from taking her rightful place as Spelling Queen Bee. We talked about it a bit. She crushed a few of the practice words before moving on to the rest of our evening.


This afternoon, I asked her how it went.


She told me that each student had the chance to spell a word. If they missed it, they sat down. The last person standing would be the class winner. They did that process twice, so there were two people from their class moving on to the next level. Both rounds, she was one of three people standing.


I was sitting on the edge of my figurative seat waiting to hear if she overcame her fear.


“I purposely misspelled words during both rounds.”


“How come? Were you afraid of what it would be like to get up in front of more people to do it again?”


“No, I wasn’t afraid. I just don’t need to prove I’m a good speller. When you’re really good at something, you don’t have to talk about it. I know I’m good at spelling — I don’t need a contest to say that I am.”


Did my 9-year-old just tell me that she doesn’t need external validation to feel good about herself?? Put a fork in me. I’m done. I just finished parenting. Princess Peach = saved.


Just kidding, of course. She also fell to the floor last night after being told it was time for bed and then crawled up the stairs like her legs were broken, moaning the whole way. I still have many, many levels left to go before saving that princess.


But, in all seriousness, I’m SO proud of her thought process. Anxiety still likely played a role (even a small one) in her decision to throw the match, but I love that the message she was telling herself was that she’s in charge of how she feels about herself.

The Notorious Mr. and Mrs. Barn

When I look at this picture, I will forever be reminded of the time we tramped around in the woods for almost two hours, climbing over trees, climbing under trees, dodging branches and scaling hills — all the while, outrunning the notorious Mr. and Mrs. Barn. Or Bahn. Jury’s still out on the official pronunciation. 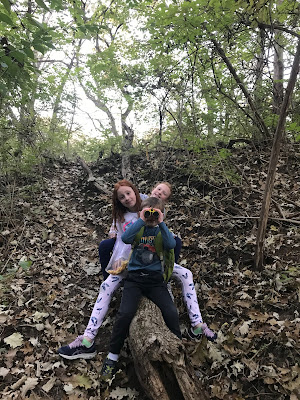 You may be confused. Let me back up.

I walk in the woods almost daily. It brings me a sense of calm and peace that I haven’t found anywhere else. I’m almost always by myself, which I love, but I also have a constant simmering desire to let the kiddos run free in the woods with only their imagination to guide them. So, yesterday when I looked at the weather forecast and saw that it was probably one of the last warm-ish days, I decided it was a perfect day for adventure.

I texted Scott and asked him to be home early. The three of us waited at the bus stop and headed for the woods as soon as the girls arrived.

As we began our adventure, the kids decided that we should pretend to be lost in the woods, on the run from an evil couple — Mr. and Mrs. Barn. Grace, who declared herself the “main character” (naturally) was in and out of a British accent, so no one was sure if it was “Barn” or “Bahn.”

We’d pretend to see signs of them or hear noises in the woods. Once, a helicopter flew overhead and we all hid under the branches of a tall bush. Even Scott played along with us! But mostly he was avoiding being slapped in the face by branches. Claire would every once in awhile take Henry to the side and explain that it was all pretend, so he wouldn’t really think we were being chased by a couple of villains. And Henry, who had his binoculars, kept spotting Paw Patrol pups in the trees. “Look!! There’s Chase!”

Of course, once we found our way out of the woods and the story died down, there was MUCH complaining about how long it was going to take to get to the car. But I was too pumped from the memories we just made to care too much about the whining and falling to the ground in faux exhaustion.

It was quite the adventure and exactly what this family needed before we hibernate for the winter.
Posted by Katie at 9:35 PM 0 comments