It Has a Name and I'm Calling It FOUR 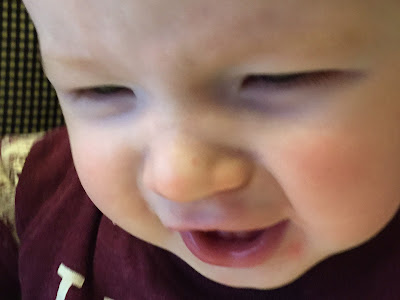 About a week and a half ago Henry started getting fussy. He wasn’t laying down for naps like normal. And when he did, they were considerably shorter than normal. He was still mostly his happy little self outside of naps, but each day that passed seemed to get worse than the day before.

I assumed his teeth were bugging him because he had no other symptoms, but then last night happened.

You see, Henry is normally a very predictable little guy. I can pretty much guess exactly how the day is going to go based on when he wakes up in the morning and the sounds he makes when he wakes up. Does he wake up at 7 a.m. screaming? Your day is going to be hairy. Does he wake up at 9 softly cooing? Your day is looking good.

But even on the hairy days, I can almost (and when I say almost, I mean 99%) always count on him going to bed at night around the same time without assistance. Even when he got his first two teeth.

So, we went to see the doctor. She went through all the typical questions. Fever? No. Vomiting? No. Trouble eating? Not really. Tugging at his ears? No. He had no visible signs of anything being wrong other than being extremely fussy.

She checked him out and then looked in his mouth. I was right — we were dealing with more than just a pesky tooth. He has FOUR upper teeth coming in. FOUR. She said one looked like it had just broke through this morning, and the rest are close behind.

The good news is that I can put a name to all the fussy. I’m calling it FOUR. In all caps. The bad news is we have three more to go.

And then, of course, the other 14 that have yet to make an appearance.