So Fresh and So Clean 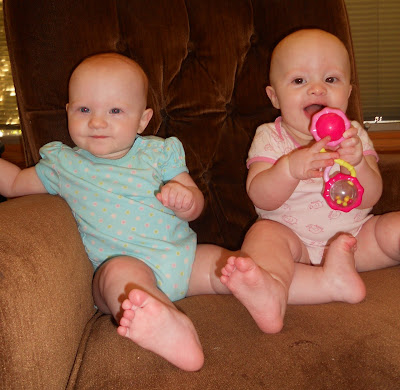 It's bath time, and I'm ready.

I've been mentally preparing for it all day. Scott had to work late tonight, so I knew I was on my own.

Giving baths is a workout these days. We bathe them at the same time. Yes, it's a bit of a logistical nightmare, but it cuts down on time and screaming. Mostly on screaming.

And that's on a good day.

Today was not a good day.

I managed to get through the bath, through the drying off and had them both sitting on the changing table when I reached into the basket to grab a diaper and I felt it.

The new box was sitting in the kitchen.

So, there I was with two naked, cold, diaperless babies and no diapers.

What did I do? I stuck both of those naked babies into Grace's crib and hurried to the kitchen the whole time chanting, "Please don't pee, please don't pee!"
Posted by Katie at 8:05 PM