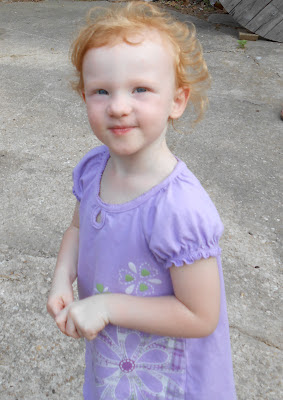 I don't know what it means, but I know it's bad.

When someone suggests to Grace that she do something she's not interested in doing, she'll scream "KA-AH!" And she usually follow it with your name.

"Grace, you need to pick up those oranges you just threw on the floor."

The tone makes me think she is saying something similar to shut up/screw you/knock it off. Or some combination of all three.

For a long time we joked that if we knew what she was saying when she put her hand on her hip and yelled something incomprehensible, we'd be washing her mouth out with soap.

But after hearing her yell KA-AH! to her dad multiple times in one day, I've made a new decision. I may not know what you're saying, little one, but I know that it's unacceptable. The tone, the hip, the lip -- it's all gotta go.