Picture Perfect ... Well Except for the Whole No-Pants Thing

When the girls were about five months old, I was able to sit them next to each other, be silly enough to get both of them to smile and snap their picture.

Then we hit a stretch starting at about one year until recently that they absolutely 100 percent refused to be in the same picture at the same time. And if you, by chance, were lucky enough to convince them to sit next to each other, you were most certainly not getting both of them to smile.

Now, when I tell them I'm going to get the camera, I return to them doing some version of this: 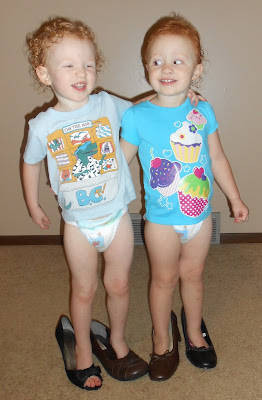 P.S. You may wonder why they are pantless. Then again, if are lucky enough to have a two-year-old in your life, you may not. Some days it's just not worth the fight.
Posted by Katie at 7:27 AM