Since our first dog, Izzy, left us first for a farm and then later forever, there has been a hole in our family. Even though I loved that girl, I welcomed the hole. Or lack of holes rather.

There were no muddy paw prints, no scratched-up doors, no holes in the wall. There were no tumbleweeds of fur blowing under the dining room table, no piles of poop to scoop, no puddles of slobber.

But there was also clearly something missing for Scott. I'm more of a cat person, he's more of a dog person. And he adored Izzy. You should have seen the way they looked at each other.

In typical Scott fashion, he bugged me endlessly about getting another dog. In typical Katie fashion, I reminded him endlessly of all the reasons we didn't want another one, including and most importantly that we had to part with our last dog because our new home wasn't a good fit for her. (She couldn't run for miles and miles).

He argued that we could do our research this time and find a breed that was more of a fit for us. I put up months and months and months of resistance. I just wasn't ready for the responsibility of another being.

And then there were the girls. As I assume most kids do, they love dogs. They run up and ask everyone they see (including total strangers) if they can pet their dog. And after every encounter, Claire would hang her head and say "I wish we had a puppy."

So, a couple of months ago, I started considering the dog idea. I wrote down all of my arguments against one and Scott and I started finding solutions to my issues.

We decided that the breed that fit most of our needs was an Australian Shepherd. We looked around and couldn't find anything that wasn't $800. We checked shelters, rescue organizations and PetFinder. There were a few Aussie mixes, but we were trying to avoid those if possible. We were realizing that finding this type of dog for free or even a reasonable price was going to be difficult.

It had been a couple of weeks without much talk about a dog when I sat down Thursday evening and, on a whim, checked Craigslist.

I still don't know what compelled me to look. Scott's the dog person. I am the reluctant follower. For weeks, he had been checking all the sites and bringing me ideas. But for some reason, that night I did a quick search.

In a town about an hour away, an 18-year-old girl was trying to sell her Aussie puppies. I took one look at the pictures and hurriedly called down to Scott. We called the owner and settled on one of the puppies.

And here's where it gets strange.

We were debating when we could drive to get her when the girl realized that we were coming from the town she was headed to on Friday. It turned out that she is getting ready to go to college and already had plans to move here the next day. She agreed to bring the puppy with her.

After we hung up with her, I told Scott I knew nothing about having a puppy and doing it right (Sorry, Izzy) so I was going to need to go to the library and check out some books. He shook his head and called me Hermione, but agreed.

While I was skimming the non-fiction section for dog books, the girls were down in the children's section with Scott. The girls picked out about seven books (many of which they just grabbed off the shelf without even looking at them) and we headed home.

At this point, they knew nothing about the possibility of a puppy. When we got home, we sat down and started reading their books. As we read through them, I looked at Scott and asked "Did you help them pick out books?" He was as surprised as I was -- four out of the seven were about getting a puppy.

Weird, right? It gets weirder.

So, the next day, we met our breeder girl at a nearby park to pick up the puppy and it turns out our breeder is actually a twin! If I could picture what our girls will look like 14 years from now, it wouldn't be much different than these two girls. They had reddish-brownish curly hair and freckles. It was eerie watching these twin girls handing over their puppy to our twin girls. It felt like more than just a moment. It felt a little like fate.

And the weirdest part of the whole thing? I was excited to bring this puppy home. I felt an immediate connection to this sweet girl. So, connected in fact, that in the middle of the night on the first night, when she was whining (for her mother? siblings? home?) I sat next to her until she fell asleep and then fell asleep next to her crate. I, the girl, who resisted a dog for so many months, who was reluctantly getting one for the sake of her family, slept on the kitchen floor so she wouldn't be alone. 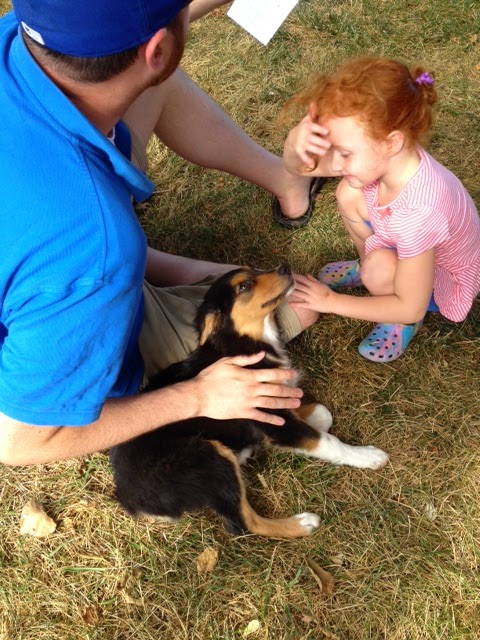 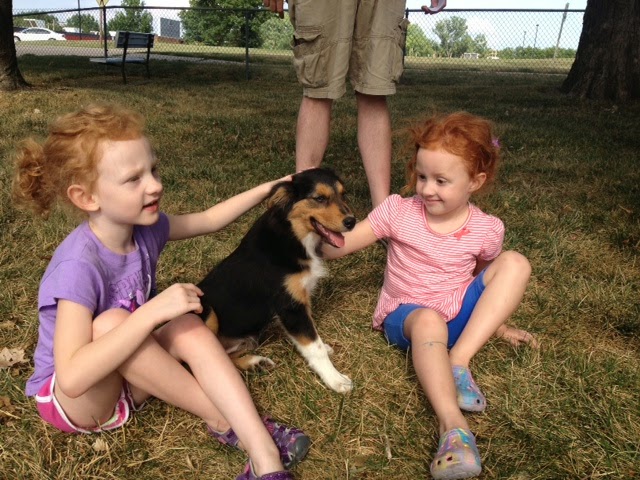 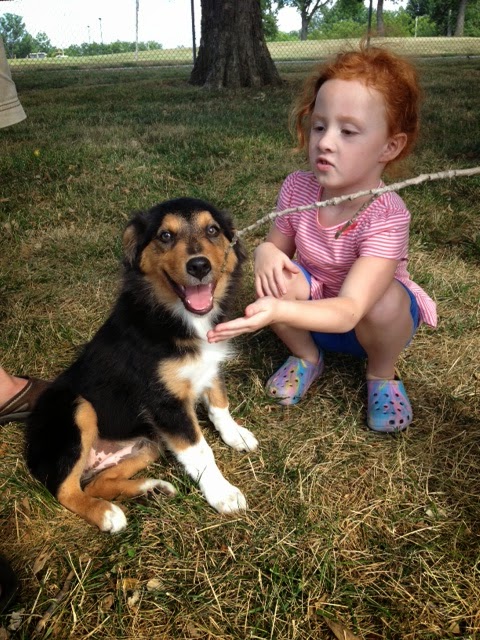 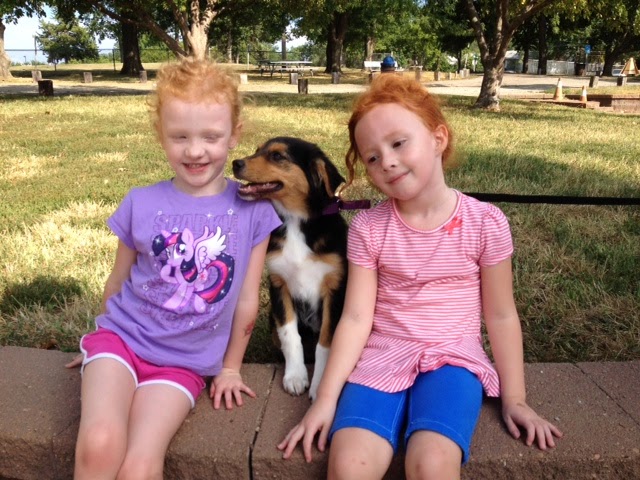 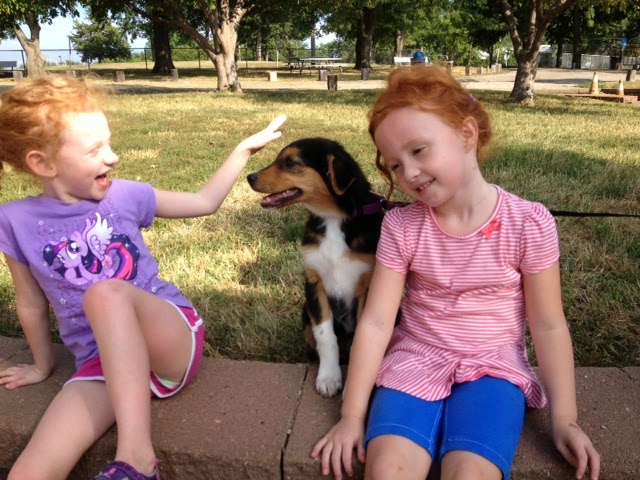