It Has a Name and I'm Calling it SIX

March 12. Mark it down, folks. It was the day I saw light at the end of the tunnel.

Six weeks ago, Henry and I started down this path. It started out as a little fussy. You remember, right? I took him to the doctor when we passed “a little fussy” into “full blown miserable.” Her diagnosis was teeth. Four of them, she said. And I don’t doubt that she was right. He still has only three of the four she spotted, so he must be an extremely slow teether. That has to have added to the pain.

But a few days after we saw her, I took him back to the doctor. He seemed to be getting worse. This time, the diagnosis was ear infection. We went home with antibiotics and our fingers crossed. We saw a slight improvement for a few days, but definitely not back to normal and the improvement didn’t stick.

We went back to the doctor a week later and he said the infection was gone. Another 4-5 days of intense suffering for both Henry and I, and we went back again. Diagnosis = ear infection … again. So, we went home with a different antibiotic and our fingers AND toes crossed.

For six weeks, he has been miserable. Six weeks he hasn’t been able to get to sleep on his own. Not at nap time. Not at bed time. Not in the middle of the night. For three of the worst weeks, I couldn’t get him to sleep at all. We took car ride after car ride to help the poor baby. He’d scream when I’d hand him to anyone else. Night after night, he’d wake up 4 or 5 times in the middle of the night and scream for me. We’d pace in his little room, back and forth, back and forth. Many nights it took me an hour or more of pacing and patting and bouncing to get him back to sleep. Some nights, I’d give up trying to get him back in bed and just sleep with him on my chest. And even then, he’d wake every hour or so.

For six weeks, I have been miserable. Exhausted beyond anything I thought possible. Not ever sleeping for more than 2 or 3 hours at a time. My back and arm muscles killing me. I’ve had several mini-breakdowns. Crying in the shower. Crying in the middle of the night. Crying in the car. I took off a few days from work during the worst of it. I felt so alone and out of options. I found myself silently wishing time would pass faster — then immediately felt guilty for wishing it.

We saw the doctor two days ago and he cleared his ears. And then yesterday he took two monster naps and for the first time in 40 days, went to bed on his own and didn’t require Mom’s rocking/patting/bouncing/pacing ritual in the middle of the night. 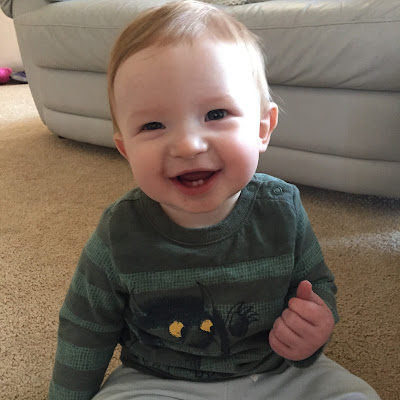 When I woke up this morning, I felt so refreshed, I was sure I could climb a mountain. I settled for tackling the mountain of laundry that’s been slowly building for six weeks. Baby steps.