Oh, What A Night: Part II 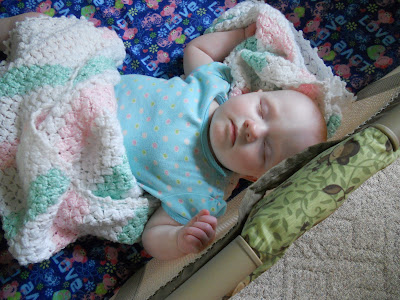 Let me take you back a few days. It was Saturday night, and the day was wrapping up pretty well. We had taken the girls to our small town fair (complete with their first parade!) and they had behaved swimmingly. They were in bed for the night and we were headed there, too.

The house was quiet, we were starting to doze, when Grace let out a wail. Now, this is not terribly unusual. One or both of them usually wake sometime during the night and after a few pats on the back, they slip back to sleep.

Grace woke at 11 p.m. and didn't go back to sleep until 2 a.m. We patted. We rocked. We swayed. We even took her for a drive. Nothing worked. Every time we went to lay her down, she would let out a blood curdling scream. So, we stayed up with her, taking turns, not having a clue what to do with a baby who won't sleep.

She finally gave in three hours after she woke, and we all hit the sack.

This happened again the next night. And the next. Until two nights ago when I decided that I just couldn't take another night of the torture.

I went through all of the possible problems ... teething, separation anxiety, too much stimulation, Ihatemyparentsitis. I talked to my mom. People from work. People from Scott's office. But it wasn't getting any better and we were no closer to a solution.

So, we went to the doctor yesterday, and she confirmed what we suspected. An ear infection. She said give it a day or two before we see improvement.

But last night after only two doses of the antibotic and some tylenol, we put her to sleep at 8 p.m. and she didn't wake up until 6:30 this morning.