I'm not going to beat around the bush. Or draw out the ending. Or make you guess what crazy thing happened to us this weekend.

Grace went to the ER. And it was completely my fault. 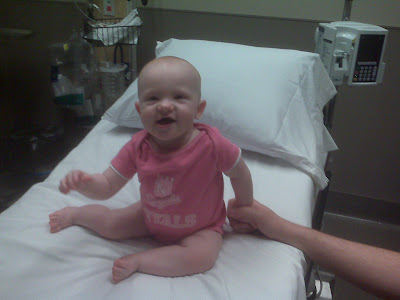 She's fine now, but Saturday was a bit of a rough day for all of us.

You see, Grace still takes naps in the bassinet part of the pack 'n' play … well, at least she did until Saturday.

I know, believe me, I know. What was I thinking letting a 9-month-old sleep in a bassinet? Well, this particular 9-month-old had yet to pull herself up. She' had been perfectly content to just sleep in there with absolutely no curiosity about what was on the outside of the bassinet.

But Saturday I guess her curiosity got the best of her because as I was walking down the hall to check on her, I heard a very loud "thud."

The kind of thud that might make you think your baby just fell out of her bed. But surely my little Gracie who has yet to pull herself up couldn't have fallen!?

I dropped what I was holding and ran into the room, and there she was laying on her back right outside of her bed.

I screamed. I could tell she wasn't breathing. And she looked scared out of her mind. That made two of us.

I screamed again. Scott came running, and the next five minutes was a lot of panicking.

But after a few seconds that seemed like hours, she started breathing again and was acting fairly normal for a kid who just dove head-first out of her bed.

We took her to the ER just to get her checked out. My imagination was running wild with internal bleeding and punctured lungs. But as it turns out, she was just fine, if not a little shook up.

Scott reassures me that things like this happen to every parent. And I know we all make mistakes from time to time, but I have learned a very important lesson.

Never underestimate your children.
Posted by Katie at 10:21 AM

Email ThisBlogThis!Share to TwitterShare to FacebookShare to Pinterest
Labels: Grace

Oh Katie! I'm sorry hun. I'm sure this was a heart-in-your-stomach moment. You are doing a great job, momma. :) And now you have something to tell little Grace about the first time she has to take HER child to the emergency room. :)

Oh boy have I been there. Sly rolled right off of our bed one night, scared the be-jeezuz out of me. He was fine though. Izzie careened down the stairs last night, Rhiannon trips over thin air. It never ends.

On the upside, kids are pretty sturdy little critters and they heal super fast.

She looks like she is enjoying the trip! We all do those things and I think is better to be cautious then to ignore it and have a serious problem. I would tell you my experience but my son would kill me. :) Cheri