Better To See You With

Last week Claire had eye surgery on both of her eyes. I didn't talk about it on here beforehand because I couldn't bring myself to. Since the moment we scheduled the appointment, I had been quietly panicking.

Even though Claire's vision is fine, her eyes don't work together yet. When one is focused, the other is looking inward. We tried glasses first, but she is what the doctor called a non-responder. Basically, they weren't helping with the alignment and they were making her vision worse.

I heard from just about everyone that the procedure was pretty routine and the doctor told me he had done thousands of these procedures. But I also read the literature that they force you to read and sign saying you've read all the risks. And let me tell you, it was frightening. I was terrified we were going to blind our child or worse.

Every time the panic rose to the top, I would squish it and immediately think of something different. I did that multiple times a day for the few weeks before surgery. I have so much compassion for those parents who go through much, much worse. You are the bravest of the brave.

I knew this was relatively minor as children's surgeries go, but they were still going to wheel her away from me, put her to sleep and cut into her eyes. An image I couldn't shake.

The night before the surgery I had a dream that Claire died while under anesthesia.  I woke up clutching my chest, trying to calm my breathing.

The panic was rising.

Claire's entourage (Me, Scott, Grace, both sets of grandparents, Aunt Carrie & Uncle Nate) made the trip to Wichita the night before. We bowled (big thanks to our friends the Halls for loaning the wheelchair!) as a pre-surgery adventure. 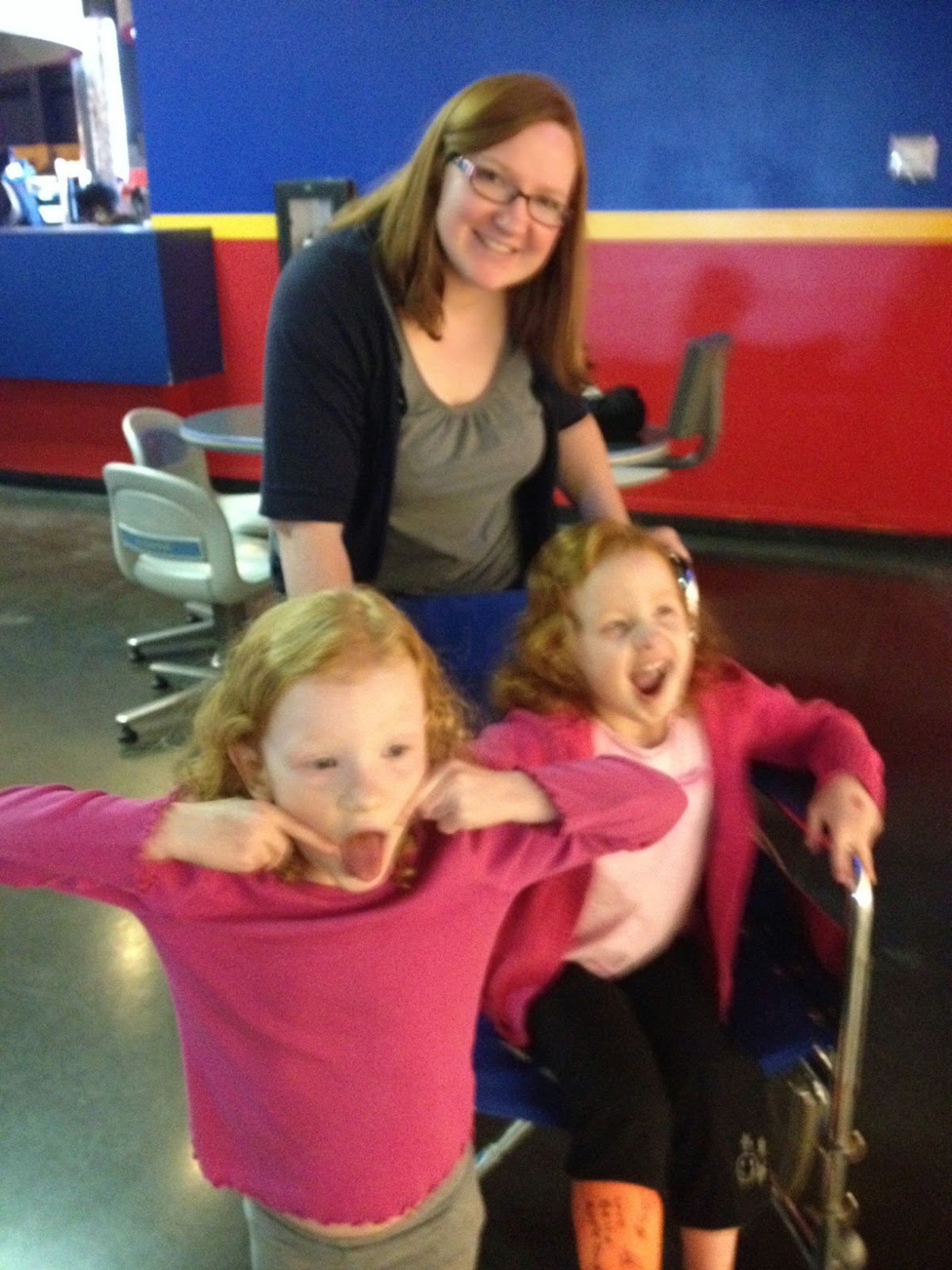 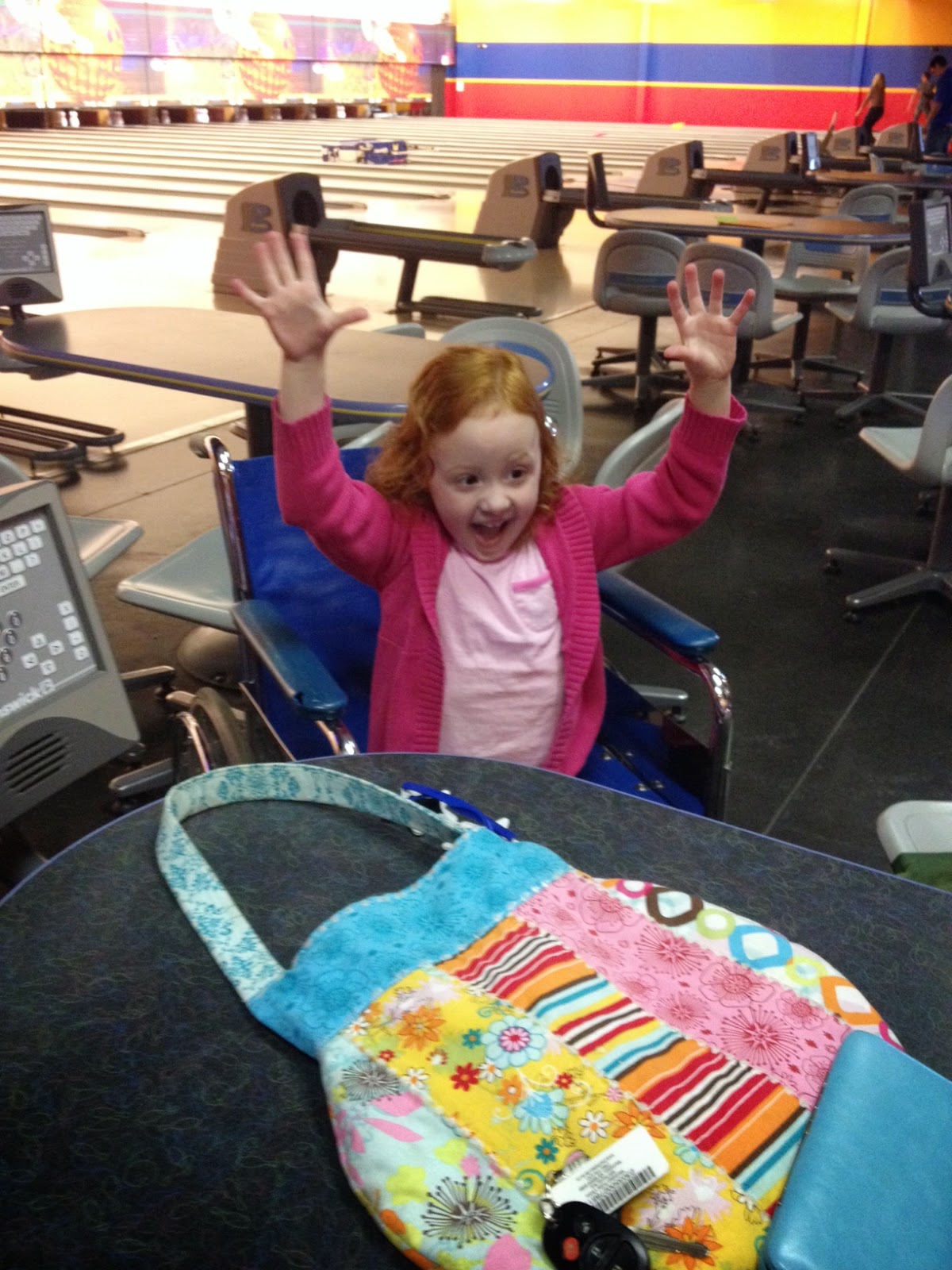 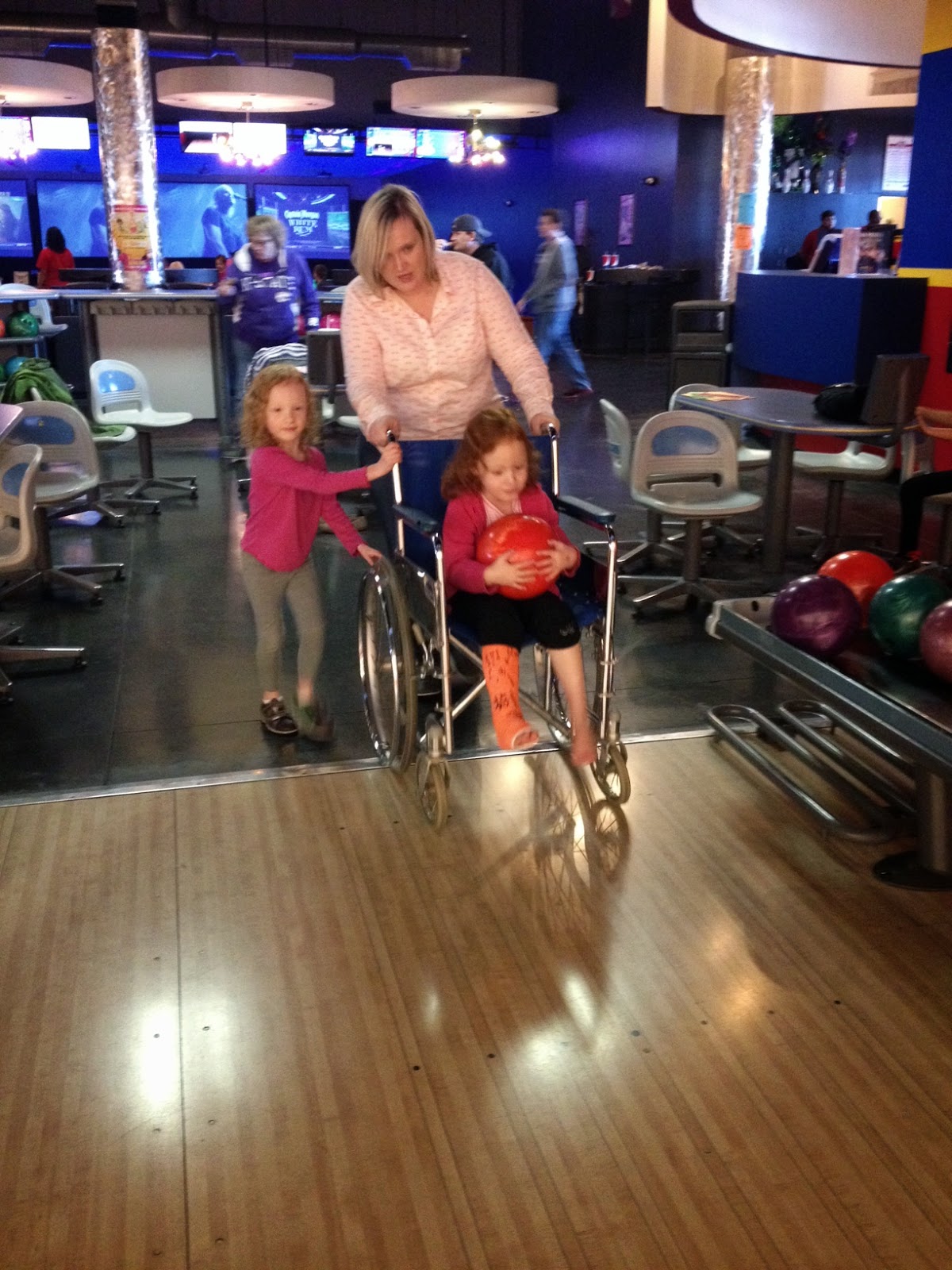 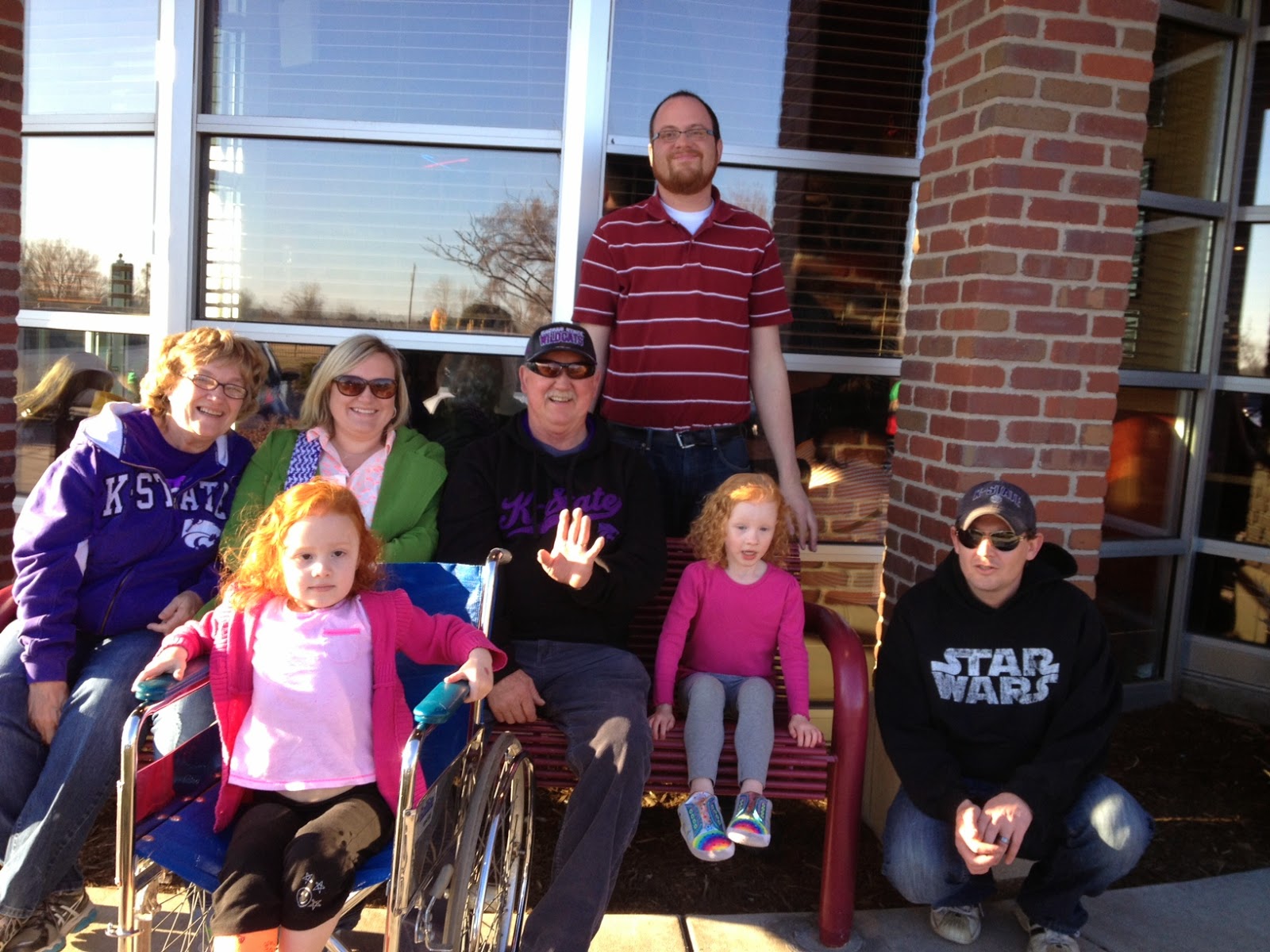 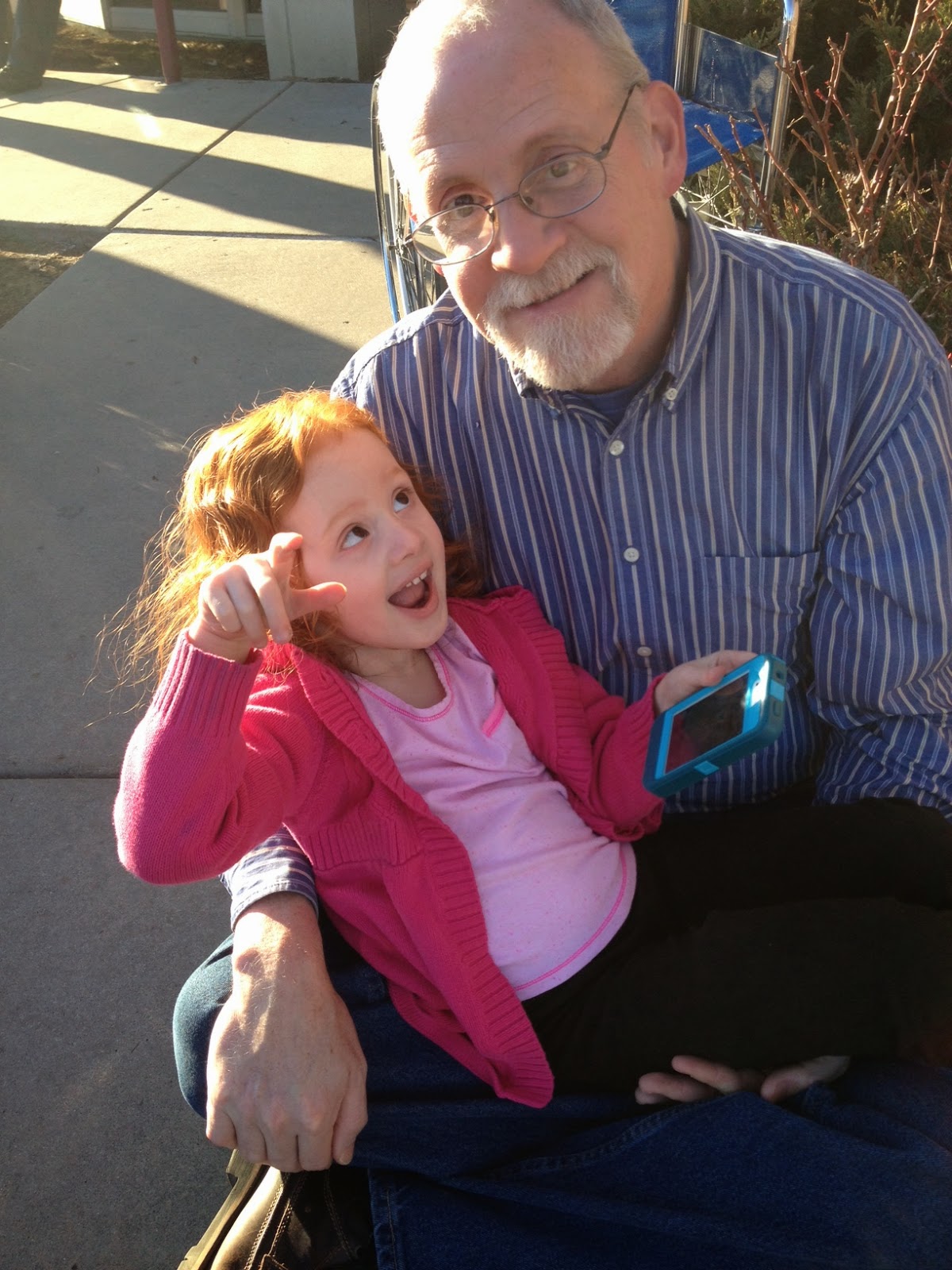 We ate dinner at Red Robin and went back to the hotel to crash. Well, at least the adults did. Grace refused to settle for the better part of an hour and Claire was right there with her for most of it. 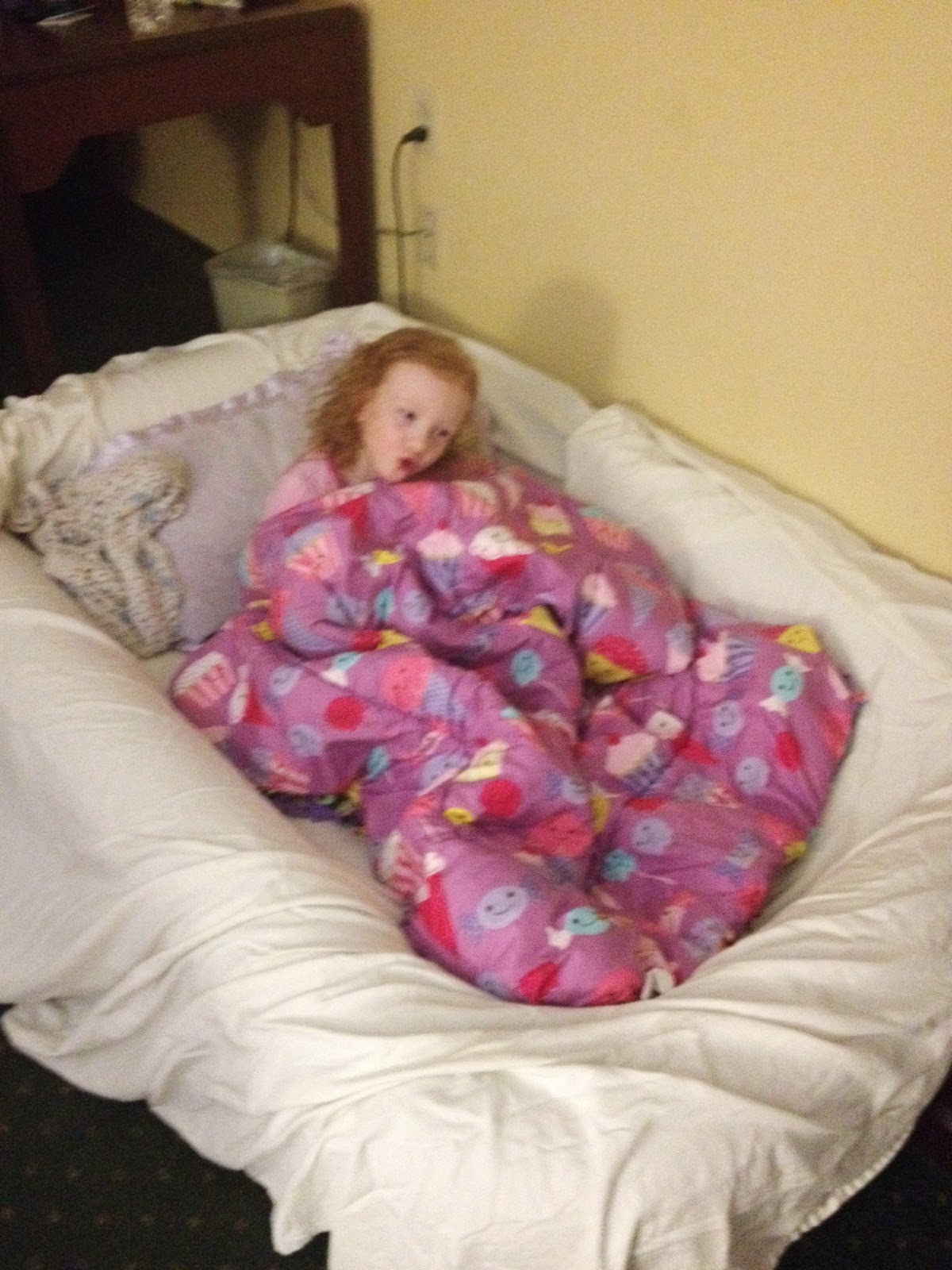 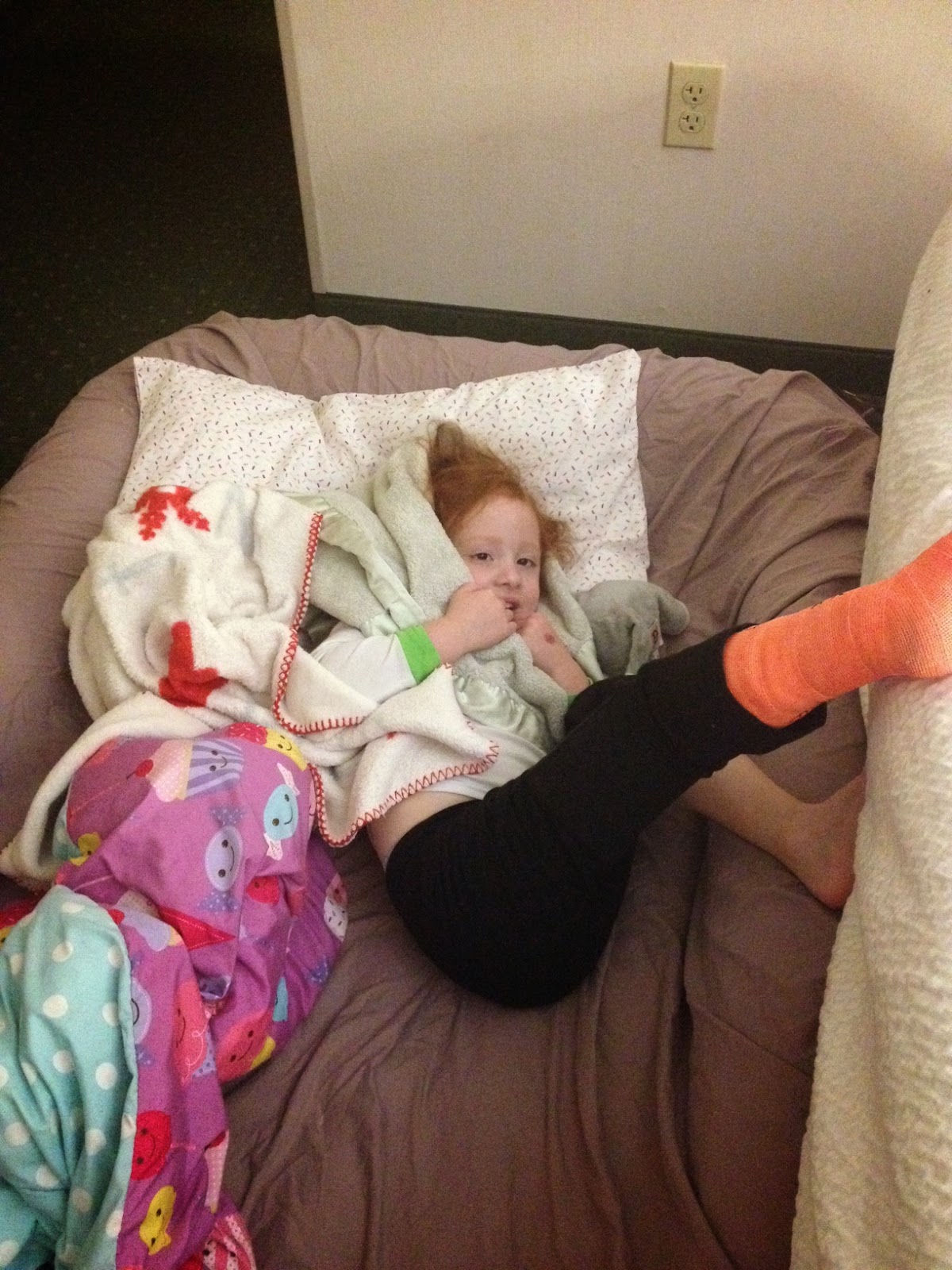 We woke up before the sun on Thursday and loaded up to head to the surgery center. Grace stayed at the hotel with my Dad and my sister. 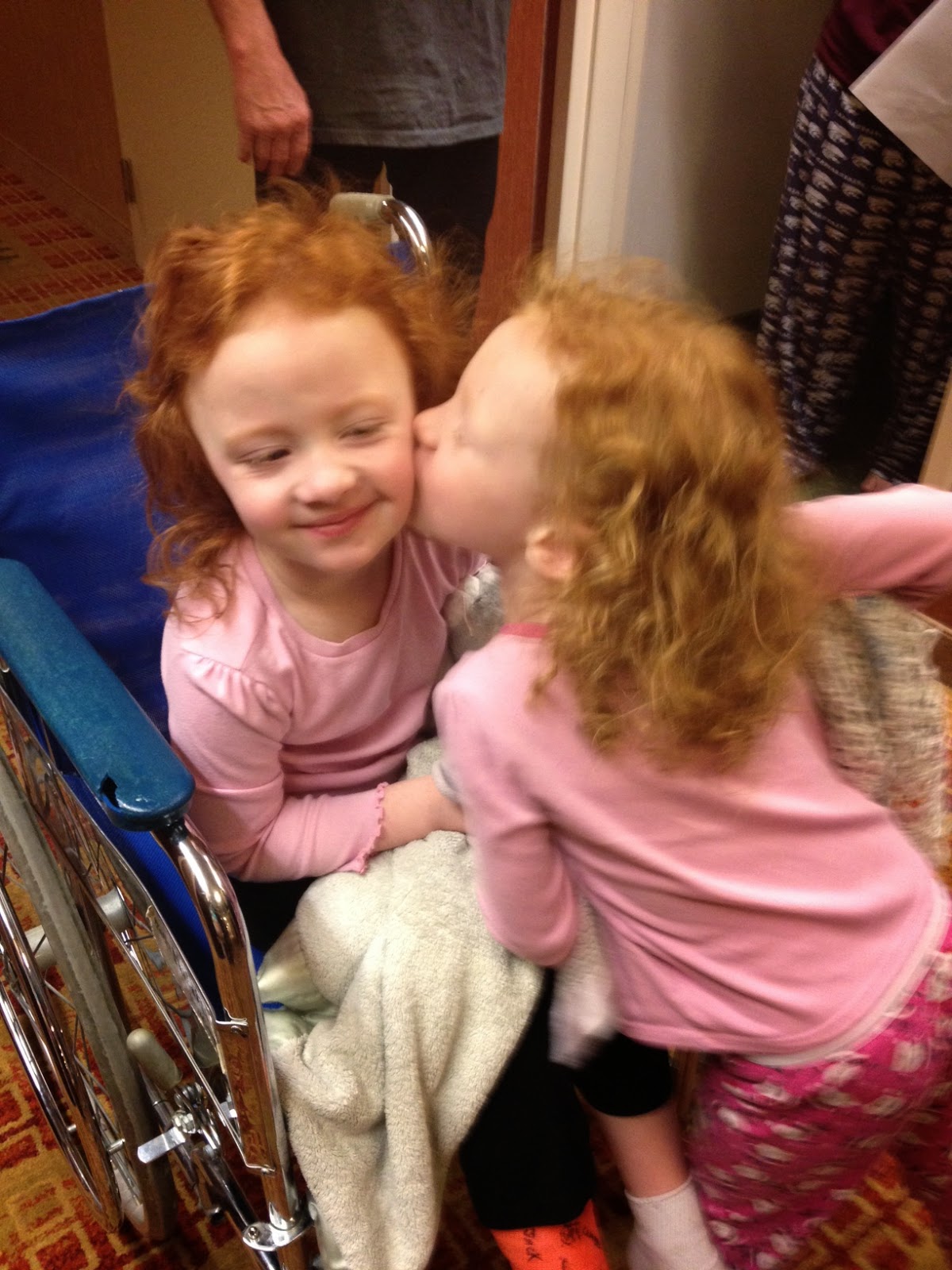 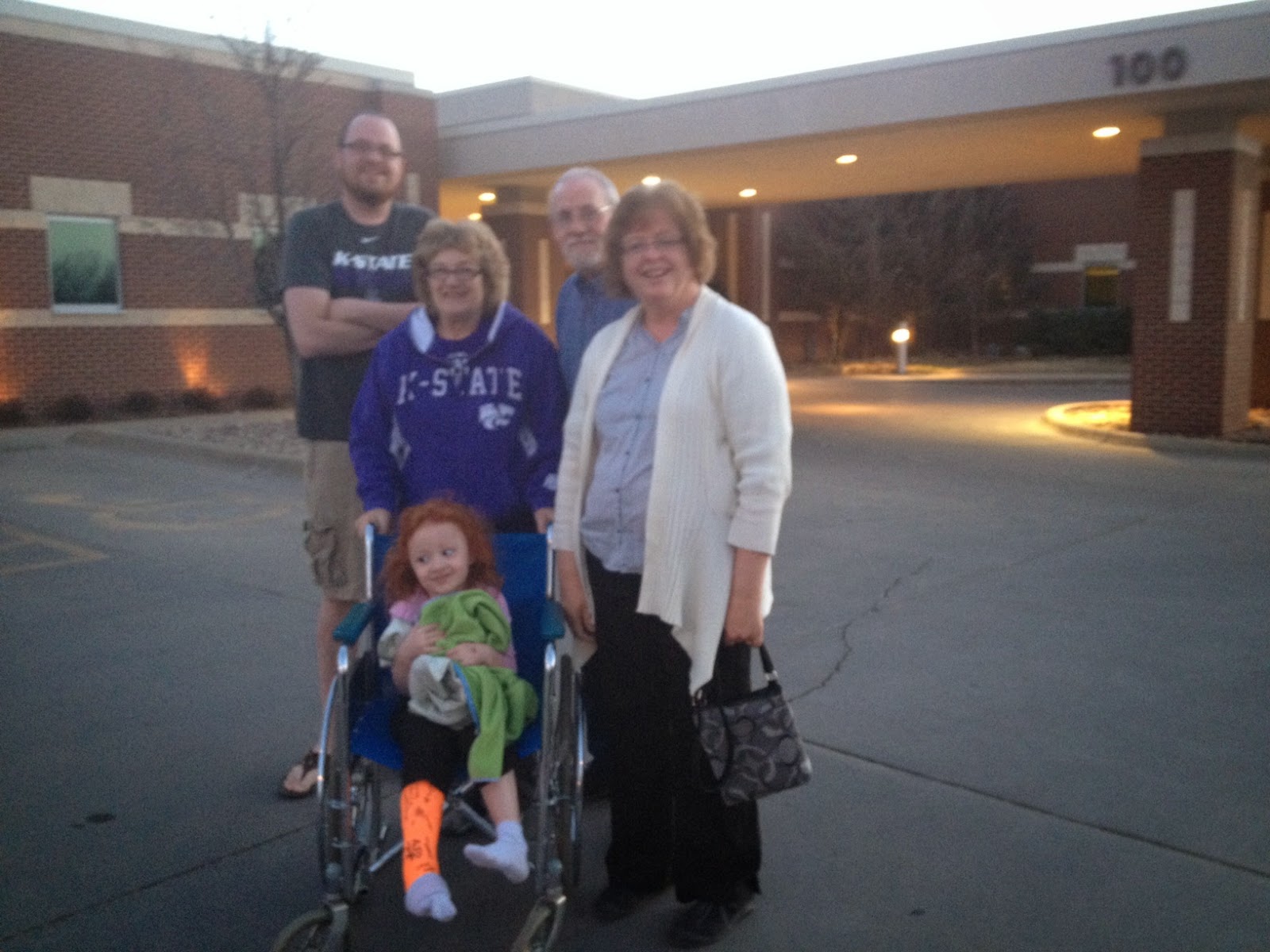 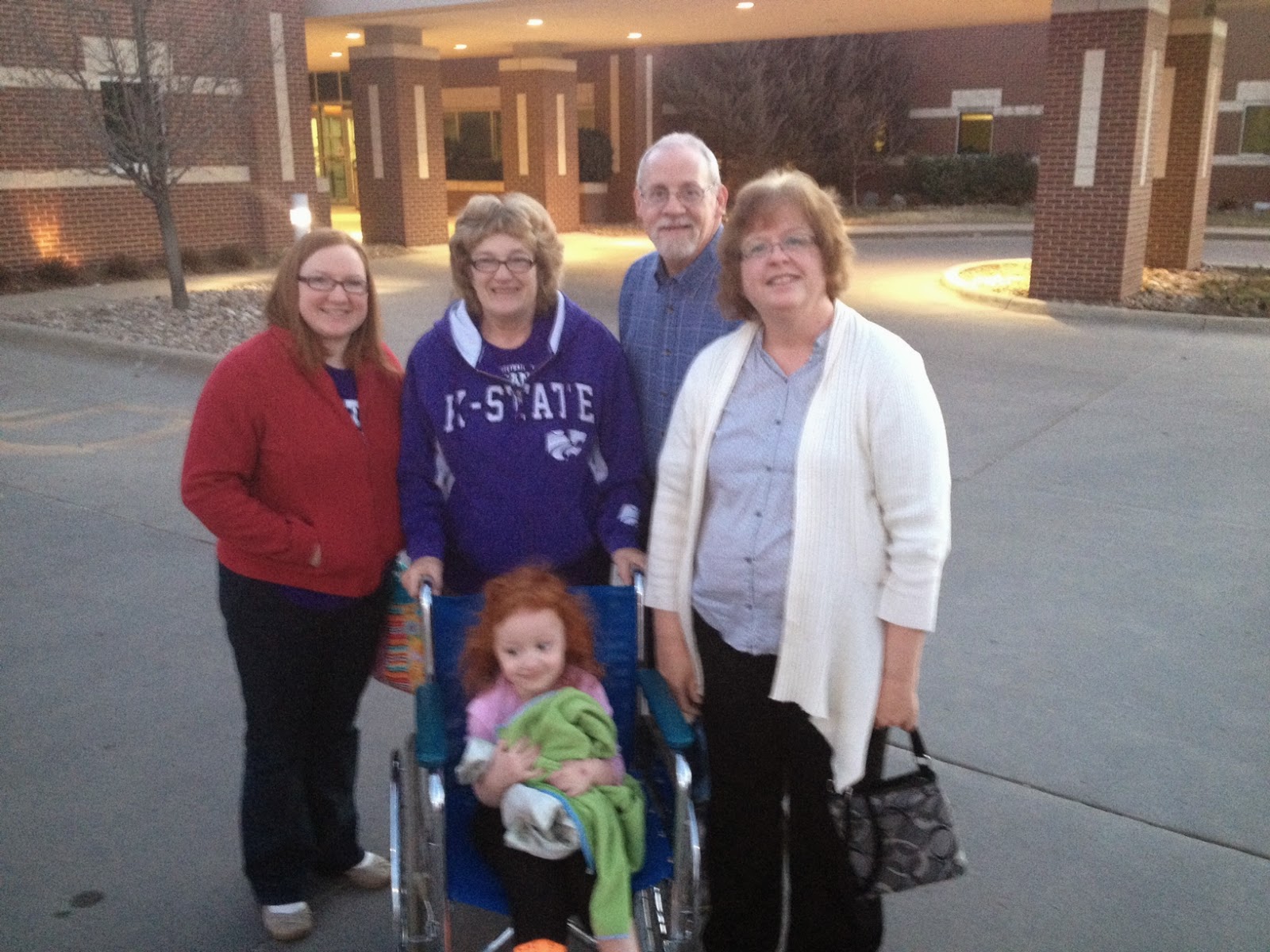 Claire did fine up until I reminded her that we wouldn't be able to go back with her to "fix her eyes." The nurses were good though and promised her she could help them blow up a balloon when she got back there. 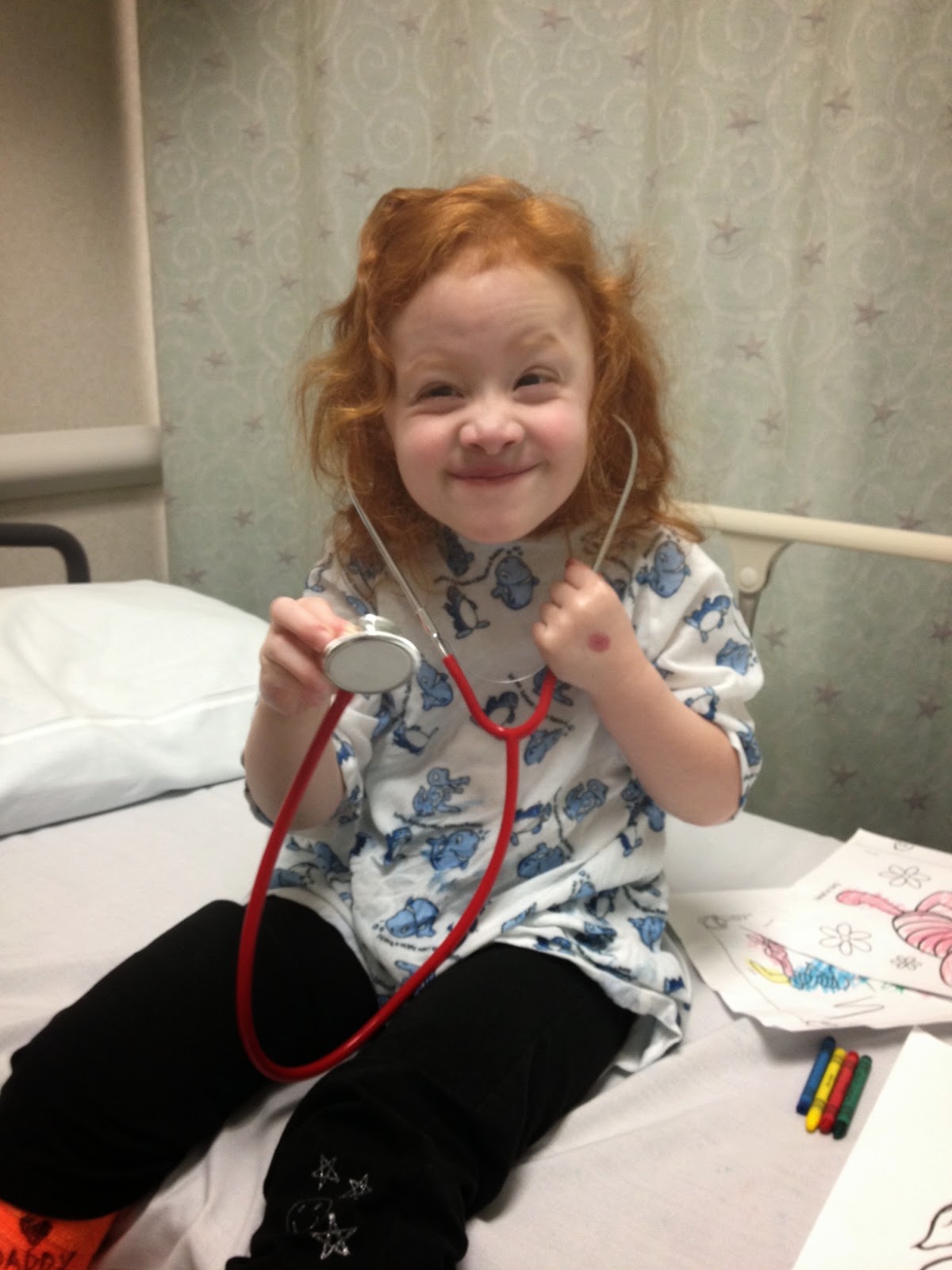 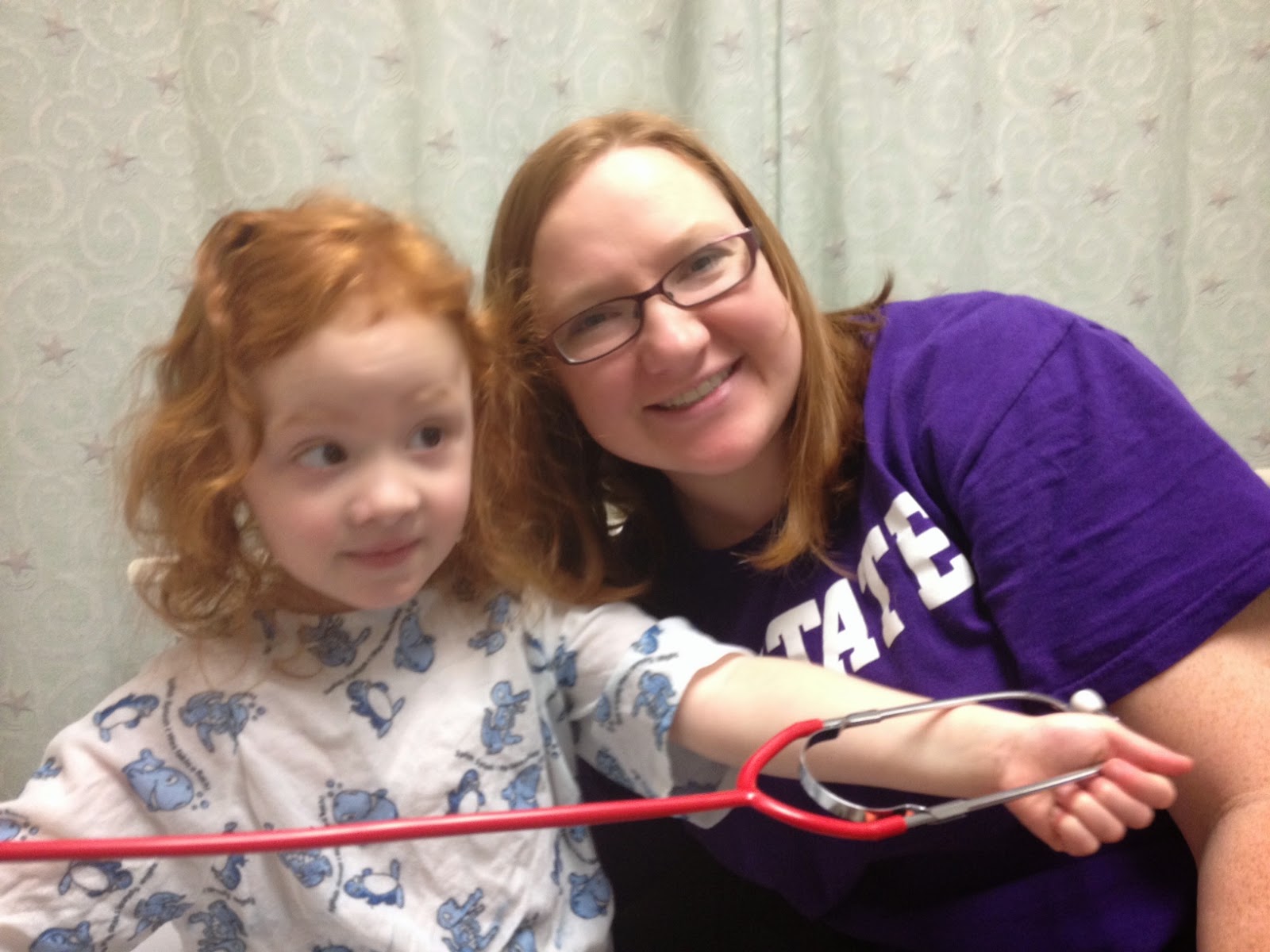 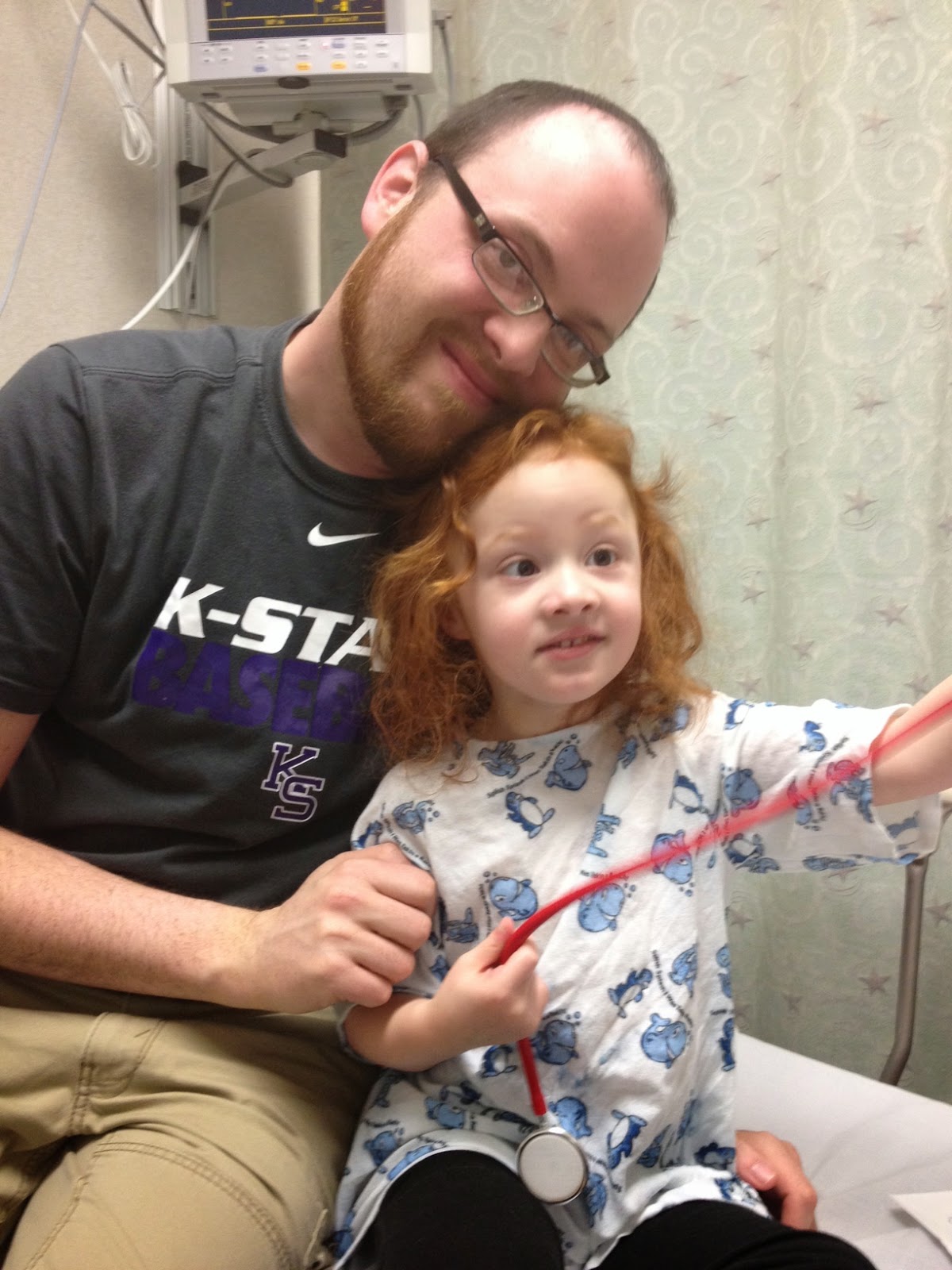 Waiting was terrible -- although made so much better by my mom and Scott's parents being there. We really couldn't be any luckier to have such caring, supportive parents.

They called Scott and I back to debrief. The surgery went fine (huge sigh of relief). And a few minutes later, we went back to see her. The nurse told us that all kids are upset when they wake up, but that may have been the understatement of the year.

She woke up screaming, and then switching between trying to scratch her eyes out and rip her IV out. It took three of us to hold her down and even then we weren't really all that successful. The nurse said I could sit on the bed and hold her. She calmed down after that, but was still upset that she couldn't see. Scott and I both had tears in our eyes watching her in so much pain. 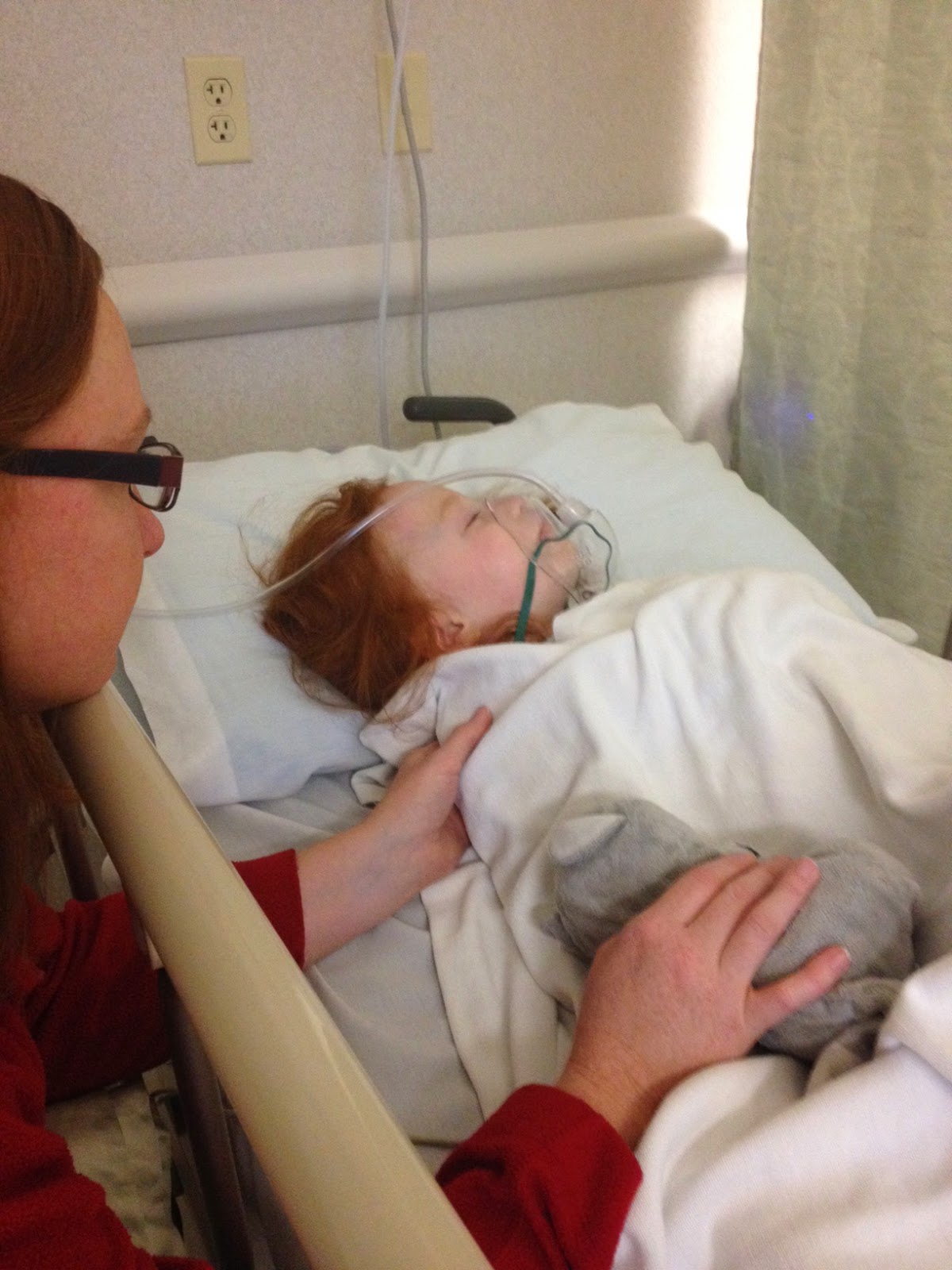 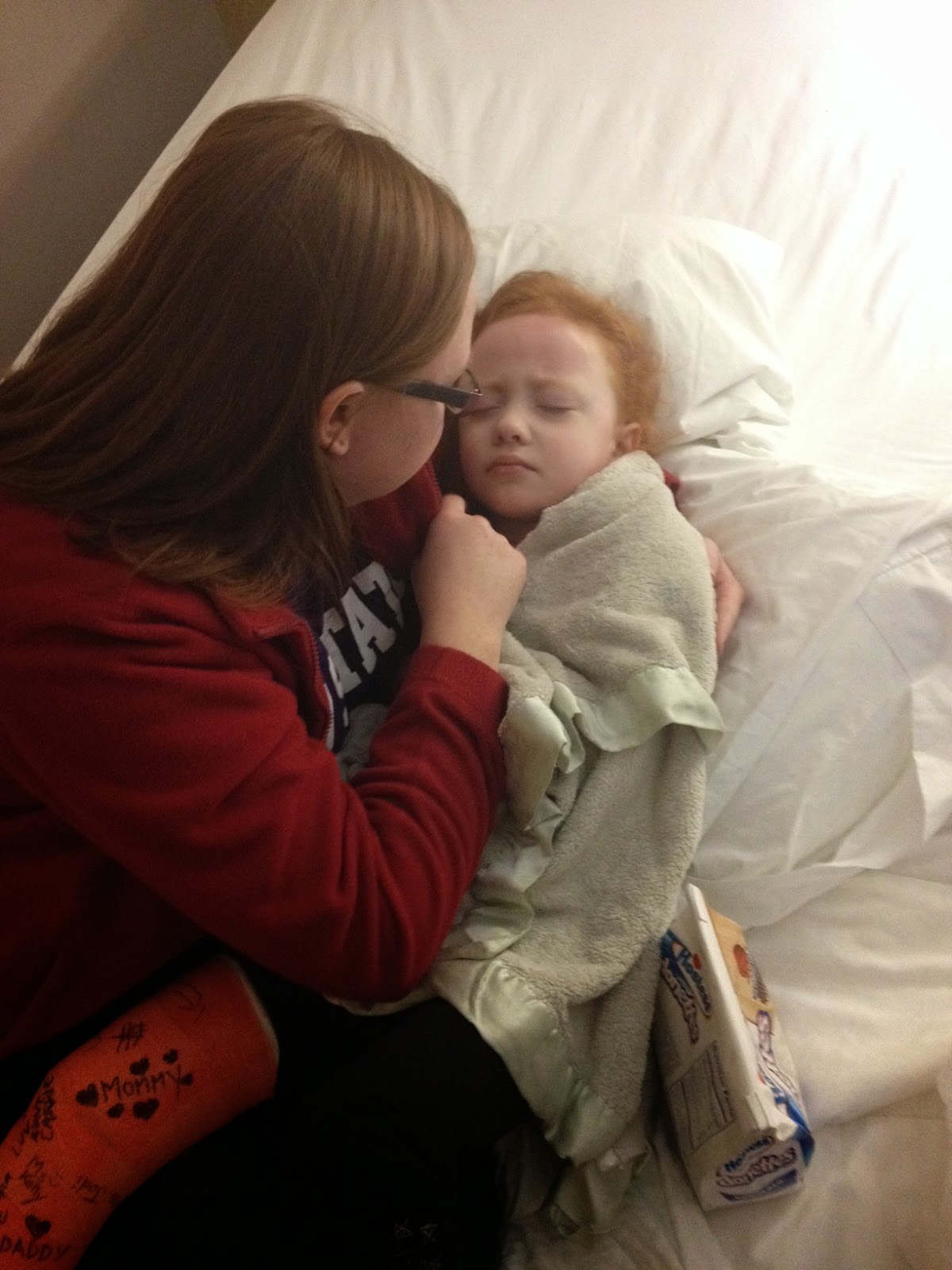 As we were leaving, the nurse called her a "spit-fire."

She's doing fine now and rarely complaining about her eyes. We go back at the end of April for a post-op and should know then how successful the surgery was. Let's all cross our fingers that she won't have to do another one.

But either way, I know she's "Claire Tough." Especially when donuts are involved. 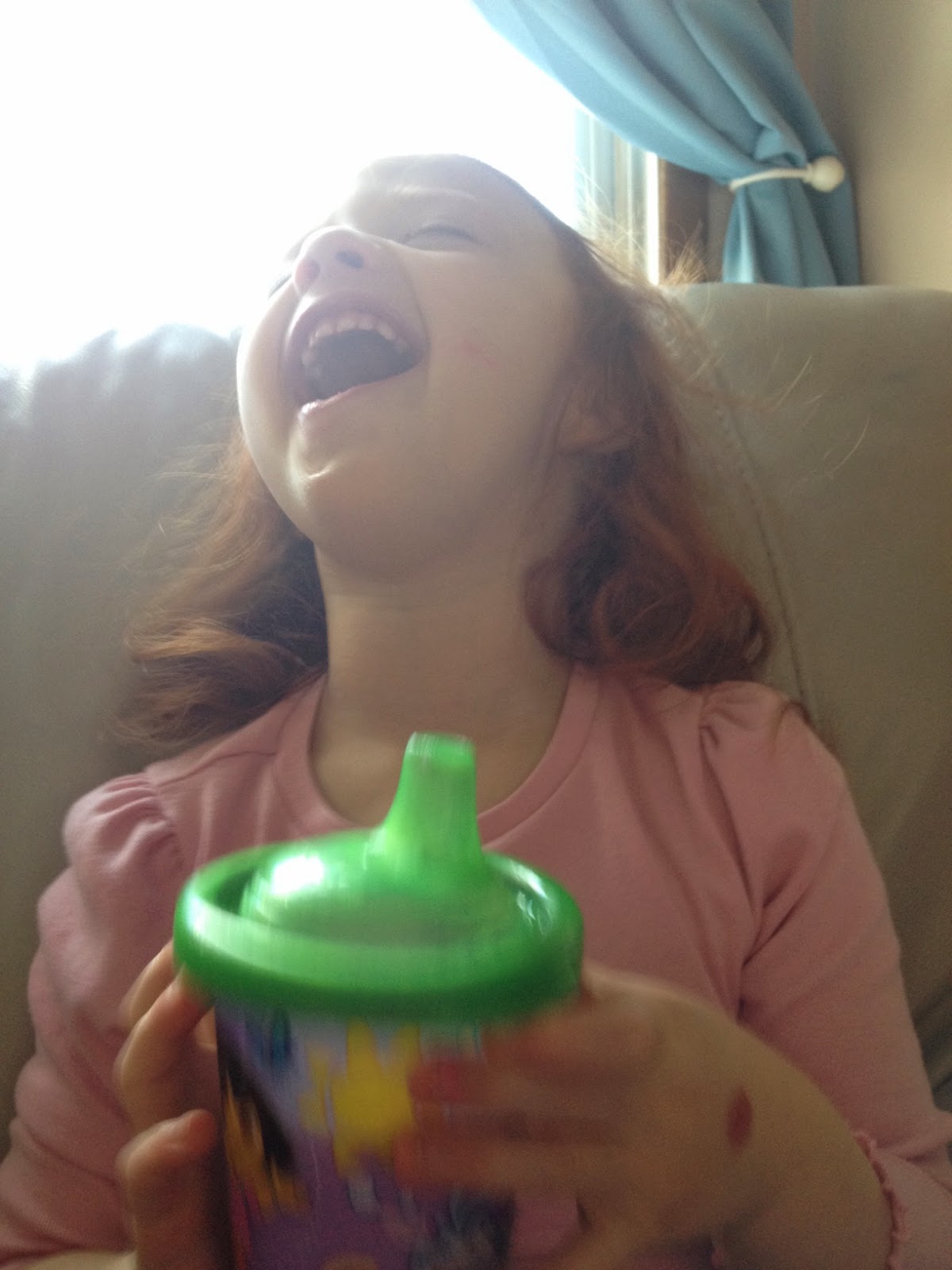 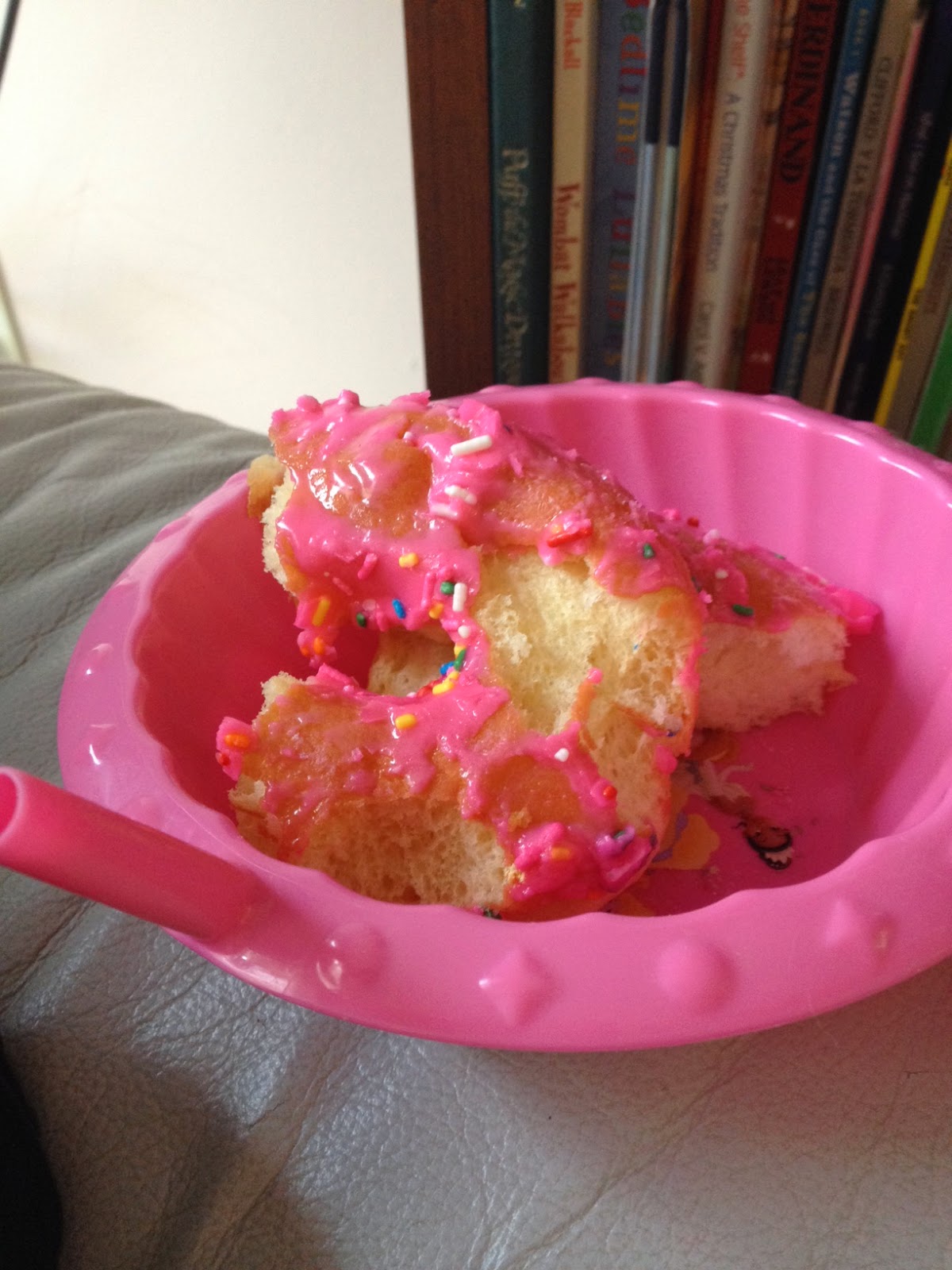 I can't say it enough times: HUGE, HUGE thank you to our family. From having fun the night before, to waiting with us during surgery, to entertaining Grace at the hotel, to helping us pack and unpack and driving back with one kid who couldn't see and one who required multiple potty stops (including twice on the side of the road) -- I feel immensely lucky to have you all in our lives. I know the girls feel the same way.