Eleven days ago, Henry caught a cold. It started out as a runny nose. Slight cough. Fussy nights.

Two nights later, he wouldn’t even let me lay him in bed. Every time he sensed I was thinking about it, he’d start hollering. So, that night, I piled up some pillows on the twin bed that’s in his room and he slept on me while I lay in a semi-sitting position, with my neck twisted in an unnatural position and the top half of me freezing because I couldn’t pull the blankets over his head. And, of course, not moving the tiniest of bits for fear I would wake him.

That Sunday, I took him to minor med and they told me “it’s a virus.” Which is code for “good luck, lady.” I hung my head and went home with two recommendations: use saline nasal drops and a nasal aspirator, which is code for “go home and torture your kid.”

But then it got better-ish for a few days. He still wasn’t napping or sleeping well, but at least he was doing it in his bed. 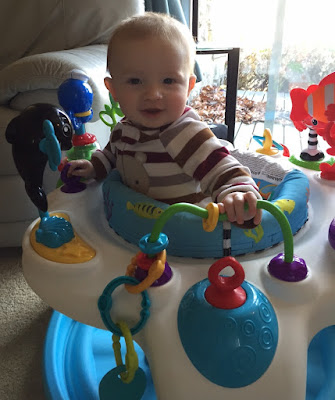 But then it got worse. He wouldn’t go to sleep for Scott at all. He wouldn’t even let me rock him in a reclined position. Every time I went to lay him down, he started moaning and then screaming.

So, for two nights, he slept on my chest. While I sat up, neck twisted, shoulders freezing, not moving and oh, did I mention that I also caught his cold? So, in addition to the discomfort of our sleeping arrangements, I spent the night trying to silently clear my throat and hold back my coughs.

I know someday I’ll remember these nights fondly — the days where he curled up on my chest and just needed his Mama. But someday is not this day. And this day, I needed a break.

So, yesterday — a week from the first doctor’s visit — we went back. I sat there holding my breath as she examined him. Lungs sounded good, nose wasn’t too bad, no fever. Then she checked his ears. “Here it is. Double ear infection.”

I exhaled and almost hugged her. Not that she had any control in the matter, but I was just so happy to hear something other than “suck it up and wait.”

Instead, we medicate and wait. I’ll let you know how it goes.
Posted by Katie at 1:16 PM