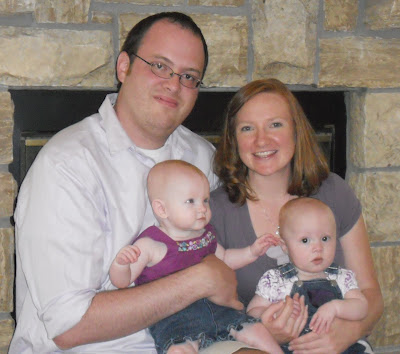 It was Wednesday. 4 a.m. I woke with severe stomach pains. And, naturally, I cursed Scott and his chili concoction that we ate for dinner.

But an hour later when I was vomiting and he was still sleeping contentedly, I briefly considered that maybe — maybe — it wasn't his chili.

And hours later when I was still vomiting and he was laughing with the babies in the next room, I gave up on the chili idea and decided I was just plain ol' sick.

Cue last night when the neighbors had to come over and ask us to keep down the noise. I politely told them it was just my husband getting sick in the bathroom.

A few hours later, I go in to get the girls up for the morning and smell the all-too-familiar smell of vomit. And there's poor Claire just sitting there not realizing the foul stench is her own.

And who said I didn't know how to share?
Posted by Katie at 8:21 AM

Email ThisBlogThis!Share to TwitterShare to FacebookShare to Pinterest
Labels: sick