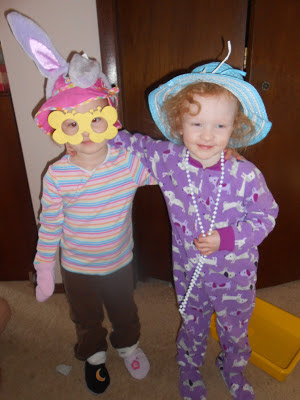 A few days ago, I was reading the girls a book about going potty and when I finished, Claire said "I want to wear underwear."

Did you hear that?

That was the sound of me dashing out of the room to find the underwear we bought months ago.

I've been waiting for a sign that they were ready. They're coming up on three and being potty-trained is a must for the preschool we're looking at, so Scott and I have been ready for awhile, but I was reluctant to force them into something they weren't ready for just because I was.

I was worried I'd be setting them up for failure, but I was also worried that I was trying to protect them too much. That's a mom's life for ya -- guilt either way.

But that shining moment when she uttered the words "I want to wear underwear." That's all I needed.

So, we're full-on potty training now. We've been doing it half-heartedly for months now, but we've ditched the diapers (except at bedtimes) and it's going really well.

Grace -- in typical Grace fashion -- wanted nothing to do with using the toilet about six months ago and now she is sprinting toward the finish line. She doesn't even stop to tell me any more when she has to go -- she just runs to the bathroom.

Claire -- in typical Claire fashion -- has been interested in using the toilet for some time now, but needs a few reminders throughout the day.

We still have a ways to go, but I have to say I'm so impressed by these girls. Sorry, I doubted you, my dears. I guess I'm in training, too.
Posted by Katie at 7:15 AM

Way to go. Those girls will always let you know when they're ready for anything. LOL