Snag a nap. Fold some clothes. Clean the kitchen. Play with your five-year-old kiddos. Doesn’t matter what you do. You have 40 minutes to do it.

That might sound like a decent amount of time to do any of those things. But here’s the kicker:

After those 40 minutes are up, so is your baby. Except he’s not actually ready to be up, so he’s cranky and generally ticked off that he’s awake. He doesn’t want to swing in his swing or bounce in his bouncy seat or play on his play mat. He wants you to hold him because that’s all that will do when he’s so tired.

Then, when it’s time to eat, he falls asleep while he’s eating, so he doesn’t eat well and then he wakes up while you burp him and he starts screaming because “WHY DID YOU WAKE ME UP, LADY!?!?!”

And then you have to put him back to sleep after he eats because he’s so tired. But he’s overtired, so he won’t just let you lay him in bed and fall asleep. You have to rock and bounce and walk and shush and swing from the rafters if that’s what it takes.

Once you get him to sleep, the 40-minute timer starts over again. And you do that all day long until you finally pass out at the end of the day. 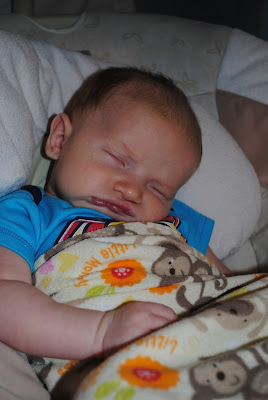 “Put your baby to sleep when he’s drowsy, but not overtired.” But he’s ALWAYS overtired.

“Look for signs of sleepiness.” You mean like the constant fussing he does ANY TIME he’s awake?

“After he wakes up from his first sleep cycle, try getting him back to sleep.” Thanks, Captain Obvious.

I finally stumbled upon some advice that went beyond what I already knew. I turned up my white noise machine and tried to get into a different rhythm “sleep, eat, play.” That different rhythm has helped tremendously. He is eating better, playing during play time, showing signs of sleepiness, which allows me to get him into his bed when “he’s drowsy, but not overtired.”

I’ve been doing this for the past five days or so and so far it’s working. He still wakes up at the 40-minute mark, but most of the time, I have been able to bridge that gap between sleep cycles. And only once in the past five days have I needed to rock, bounce, walk and shush him to sleep. I put him in his bed, swaddled, binkied with loud white noise and he nods off in about a minute or two. HOORAY!

1. I have had a catnapping kid before and I know from experience that every time you “figure it out,” they change things just to screw with you.

2. I also know that when I say these things out loud, Karma comes a knockin’ because she thinks I’m too smug.

So, I know this won’t last, but I’m going to enjoy it until it does.