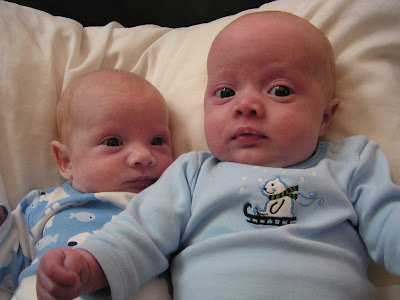 The other day, a little girl about eight or nine walked up to where the girls were snuggled in their car seats. She peered in and after taking a good look at them, said "I like the girl."

But I took no offense to this comment. I personally think all babies look pretty gender neutral. But then it hit me why she would think one was a boy. She was wearing blue. That's right. I dressed my baby girl in blue. *GASP*

And it wasn't a powder blue dress with lace on it either. *DOUBLE GASP*

So, I said to the little girl, "They're both girls." I could see her mind beginning to blow. Girl — blue. Blue — girl. Does. Not. Com. Pute.

And why shouldn't she? Who decided that blue is a boy's color? Or that pink is a girl's color?

And while we're on the subject, I will also gladly support my daughters if they want to play with dump trucks and hot wheels. Or if they want baby dolls.

It doesn't matter to me what colors they wear or what toys they play with, as long as it is their choice. Not some predetermined social norm they are expected to follow.

So until they are able to make those choices on their own, you will see my baby girls wearing blue and pink. And green. And yellow. And brown. And red. And orange. And purple. (Editor's note: especially purple. — Scott)
Posted by Katie at 9:33 AM

LOVE this post. I had an argument much like this with my mom in the middle of a store when I was shopping for your baby girls. I found an outfit that was super cute, had adorable animals like giraffes, lions, and alligators and wanted to get them for Grace and Claire. My mom told me, "Those are boyish, don't get those." Just because they weren't pastel colors! Green, brown, orange, yellow! How dare we try to dress girls in such colors?!