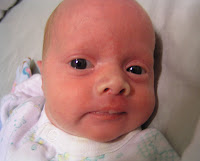 Last night, Scott and I were faced with a difficult decision -- a decision that pitted us against each other like few things do. After a terribly long day of him doing his thing (working) and me doing my thing (babies), we wanted to spend the evening together. But that left us to make the crucial decision: K-State vs. Nebraska or the season premiere of LOST. (Side note: When referring to the TV show LOST, it is always LOST, never Lost)

We were DVRing both, but only had time to watch one before we passed out from exhaustion. Needless to say, after months of me watching K-State games, I won and we settled on LOST. I did feel a little guilty, knowing that by morning, the score of the game would be all over everything. But I waited an entire year for this. (Well, 3/4 of a year, really) And didn't I deserve it? With all of the college basketball hours I've been racking up, I was owed this.

But just as we were finishing the first of THREE hours of the LOST marathon, we heard the noise that makes my whole body hurt -- a waking baby. Don't get me wrong, I love our baby girls to the moon and back, but hearing those waking sounds reminds me that I've only been sleeping in spirit-crushing 3-hour intervals for the past month.

Much as our life has become -- we tabled our plans for the moment and started feeding babies. As we were finishing up, we turned on LOST and began to oooh and awe at all of the twists and turns of the island. (By the way, how many groups of "others" will we encounter before the end of the series??)

But just before we could determine what in J.J. Abrams' world was going on, it happened. So quick I couldn't dodge it in time. My hair. My face. My neck. My Sweater. The Bed. Oh, and Claire. Covered in projectile vomit.

And there it was. The thought that maybe, just maybe, if I relented and watched the game, I would have paid more attention to burping. And wouldn't smell like curdled milk.
Posted by Katie at 10:02 AM