About a month or so ago, we tried giving the girls a peanut butter and jelly sandwich. Like silly little parents, we tried it along side a couple of other new foods. We didn't think anything of it until the area around Grace's mouth started breaking out into red blotches.

We called the doctor, gave her the suggested benadryl and watched the red blotches disappear.

We weren't sure which of the foods caused the reaction, but we didn't want to chance it with the peanut butter again.

Until yesterday. I was feeling brave and knew we needed to find out if it was the PB. So, we tried it again, but this time, without any other new foods. And again, the blotches came back. 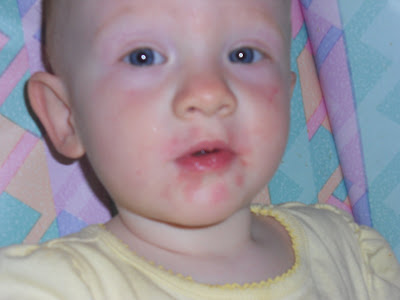 She had no wheezing or swollen tongue, like the doctor said is common of a nut allergy. Just the red areas.

So, I called the doctor again and they referred us to an allergy specialist. We'll see what they say next week.

Until then, I'm just crossing my fingers and hoping it isn't anything serious. You should do the same.
Posted by Katie at 8:02 AM