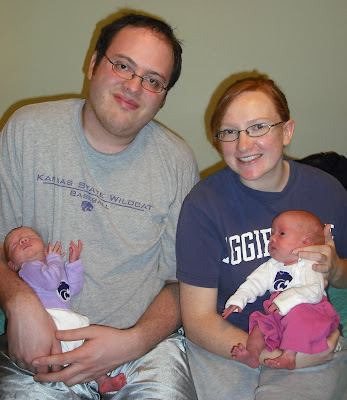 Two years ago today we found out that we miscarried our first baby. We were about two months along when it happened and it was devastating. A few months after that, we miscarried again and I just kept asking why. But I truly believe things happen for a reason, and as I sit here looking at Claire and Grace swinging their arms and kicking their feet, I now understand.

Here is something I wrote before the girls were born. If you have already read it, feel free to skip.

It has been two years in the making. That's when Scott and I first decided we were ready to have a family -- of the non-four legged kind. We were pleasantly surprised when we had a positive pregnancy test the first of February 2008. Wow, that was really pretty easy! Until 8 weeks later, when I started spotting. The doctors wanted to get things checked out, so we went in for a sonogram. We were staring at the screen, not knowing what to look for and the tech wasn't forthcoming about what he saw. Afterwards they told us to wait in the office until the doctor called. When he did and I heard the words "you've miscarried," the hot tears just started rolling. We heard all of the things that are supposed to make it feel better:
"It happens to one in five women."
"Your body was just taking care of something that was wrong."
"It will come in due time."

Those words took the edge off, but they didn't heal the pain. But with time and the support of Scott and our families, I accepted that we were one in five. And why shouldn't we be? Why should we be exempt from that statistic? I felt like I was paying my dues, so someone else wouldn't have to lose their baby.

We started trying again a few months later, and not long after, we were seeing that positive test again. But this time, my excitement was guarded. I was terrified of it happening again. Each day that went by, I breathed a little easier -- wishing that we could just make it past that first trimester. When we started spotting again at five weeks, my spirits just dropped. But there was hope. We went in for a blood test to confirm miscarriage. The doctor said my hormone levels wouldn't rise if I wasn't pregnant. And after each test, they rose. In fact, they were skyrocketing. But I was still spotting. The nurses at the office would wait -- sometimes after the office closed -- to get the results of the blood tests. They would call right away to tell me my numbers were up.

We did that daily back-and-forth for three weeks, until at 8 weeks, they confirmed that I had miscarried. And for some reason, my numbers were rising even though I wasn't pregnant. That led to seeing a specialist, getting tests done and having another D&C. But the worst part -- we wouldn't be able to try again for 6 months to a year. It doesn't seem like long, but for me, it felt like an eternity. All I wanted was to hold our little baby and give it all the love we have to give. But by this point, I was starting to wonder if we were meant to have children. I fell into a depression that was hard to recover from. There were few things about this life I was sure of -- and being a mother was something I never questioned.

By this point, I was taking a pregnancy test (or three) every month, and each month, a devastatingly negative result. Until May 2009. We took the test and it came back positive. I was happier than I could ever imagine -- but a part of me was still scared. I knew it would be a long 8 weeks of worrying, until we made it past the first trimester. But this time, I was hopeful. What was the likelihood that it would happen a third time? At five weeks, when I started spotting again, I couldn't catch my breath between sobs. I knew it was happening again.

We went in for a sonogram, and to my astonishment, we saw a little, itty bitty heartbeat. I didn't believe the tech at first, but she said she was sure. I left the office feeling on top of the world. We had never seen a heartbeat before. And when I was still spotting a week later, we did another sonogram. Imagine our shock when, this time, they told us we had TWO heartbeats. TWO. Here I was crying in the doctor's office again -- but this time, the tears were pure joy.

And nearly 30 weeks later, here we are. This chapter of our story is coming to a close. In two days, we will be welcoming two little girls into this world and Scott and I are so ready to shower these babes with as much love as we have to offer.

After two years of waiting for them, we are getting two of the best Christmas gifts we could ever imagine.
Posted by Katie at 12:20 PM