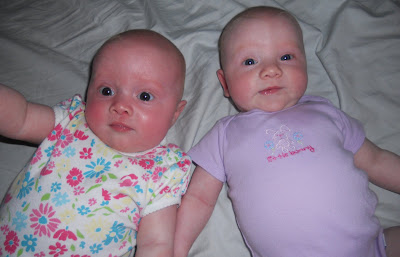 When we found out we were having twins, we were exploding with happiness. We had dealt with miscarriages and felt so thankful to have double the joy headed our way.

We were lucky enough to have good friends, family and friends' families that donated or lent us a lot of the stuff we're still using. And now, as we grow out of some of our stuff, we're trying to do the same.

Paying it forward. One onesie at a time.
Posted by Katie at 9:27 AM

Haha that is an amazing way to think about it. I'm tryin to do the same.

I'm moving and I've got to get rid of a lot of stuff I don't need or am ready to upgrade. My youngest sister JUST signed the lease on her first big girl college apartment. So I'm giving her almost all of my stuff.

Most of my stuff is hand me downs from others. I want to do the same for her.