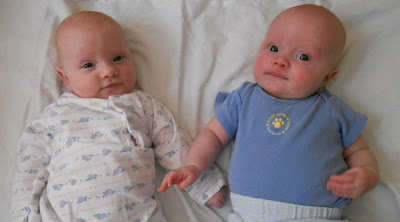 Dear LOST,
I have spent six years watching you. Six years worrying about The Others. Six years wading through the confusion. Six years hoping you would make it off that loathsome island. But yesterday, yesterday was a disappointment.

A light? That is what needs to be guarded? A light in a cave is the answer to everything? C'mon!! Yes, I love that you brought in West Wing's Allison Janney. Yes, I love that we know more about Jacob and his nameless brother. And yes, I love that they were twins. But really, people. You could do better than “the warmest, brightest light you’ve ever seen or felt.”

But back to the twins part. The distinct differences of these TV boys got me thinking about my own twinkies. They have from the very beginning shown their differences. Physically, they are different, as many of you have pointed out. One looks like Scott, one like me.

But what's even more fascinating than that is how different they are developing. One is more vocal, one is more visual. One hates to be alone, the other prefers it. One cries at the smallest injustice, the other doesn't. Sugar and spice, I call them. Both very valuable ingredients, both very different.

But let's just hope that Claire never sends Grace down a river into a cave full of light only to have her emerge as a black smoke monster. Oh, LOST. So loveable, yet so ridiculous.
Posted by Katie at 9:09 AM