I live in the boonies where we have all sorts of critters: toads, lizards, bunnies, spiders, snakes. But the worst, in my humble opinion, is the mice. And here's the reason: they insist upon coming inside the house.

You see, when we moved into this house, we were told of The Contract. Those who choose to live in the country abide by the The Contract: Critters and humans can co-exist as long as critters remain outside.

But every year at about this time, the mice break The Contract.

And every year, I'm forced to release The Enforcer. 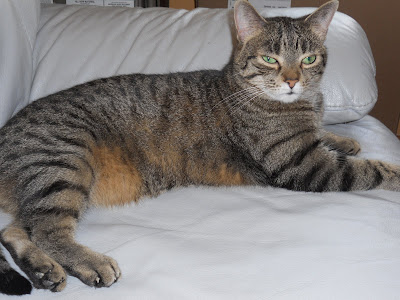 She is by far my favorite pet. Not only is she not annoying like the other ones, but she is a great mouser.

And just in case I forgot that fact, she's been showing me just how talented she is. A few days ago as I was hurriedly putting Grace in an exersaucer and mixing up some cereal for Claire, I look down and see what appears to be a very large mouse.

As I jump onto the nearest stool, I think ...

Oh, man. There's a mouse in my kitchen. I think I just saw it move.

But it's eyes are open.

You can't just leave Grace so close to it.

Oh, she's fine. It's not like her feet are actually touching the ground.

Thankfully, my father-in-law came to my (and Grace's) rescue and removed the little critter.

Fast forward a couple of days, and I see Lily has caught another one. 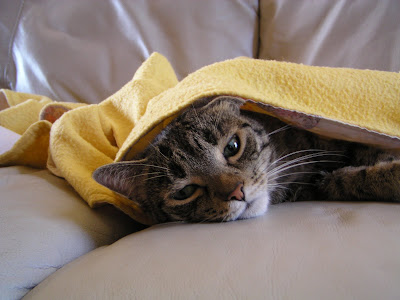 Don't mess with The Enforcer.
Posted by Katie at 8:30 AM