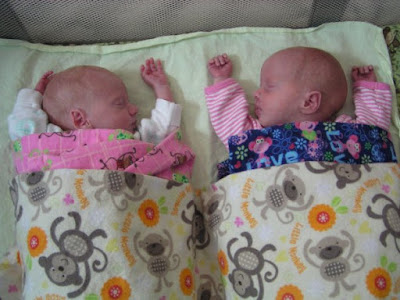 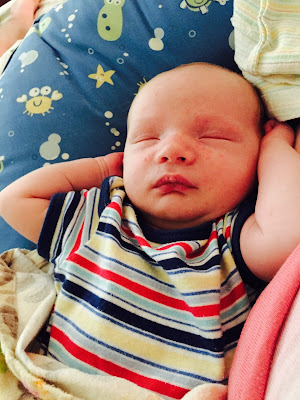 After Henry arrived, we were asked that often. It’s actually an impossible question to answer because all kids are different and one single could be exceedingly easier than another (same with sets of twins). But I’ll give you the answer for us.

In Henry’s first weeks, we were sure that he was harder. We truly could not remember the girls being so exhausting. It’s true our memories are probably blurry and we are five years older now (read: wimpier) and we have two other kids to parent. But it just felt harder.

As you likely know, they were premature, so they spent their first several weeks home just sleeping. We didn’t have to “get them to sleep” — they just did it on their own with little assistance from us. Henry wasn’t so easy. There was much more walking and patting and shushing. And when he didn’t sleep, he cried. So, there was a lot of crying until we walked, patted and shushed.

Now, nearly two months in, it’s much, much better. I’m understanding his tired signs and his rhythm of sleep, eat, play. And he started taking the binky much more consistently, which is probably the biggest help of all. Well, that, and my mom reminded me of how I use to swaddle the girls when they slept. I was sort of half-swaddling him, so I ramped up my efforts there and he now sleeps without waking himself up. He is clocking somewhere between 8-11 hours overnight, usually waking up only once to eat at around the 6-8 hour mark. (Of course, now that I’ve mentioned that publicly, he’ll completely change.) During the day, he sleeps in between each time he eats — sometimes for 30 minutes, sometimes for three hours.

During the first month, eating was a struggle as he and I learned how to breastfeed. In month two, he eats like a champ — every two-three hours during the day mostly without issue.

Getting Grace to take her bottle was a challenge, to put it mildly, while Claire ate without issue.