What a week. I started back to work on Monday. It wasn’t easy, but I have a lot to be grateful for. First off, my company has a very generous, very kind, very thoughtful parental leave policy, so I had the luxury of being off work the whole summer. Well, at least off from my paying job. I was certainly working my butt off this summer. 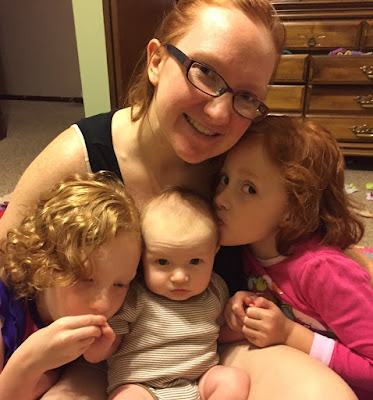 And then there’s the huge perk of getting to work-from-home and keeping Henry here with us. We don’t have good routine yet, but with the help of my Mom and Scott and the girls being in school all day, we made this week work.

It meant early mornings to feed Henry, get the girls up, rush around for an hour getting them ready, rush to the bus stop, rush home to work, work all day until it’s time to get the girls from the bus stop, come home, work some more and crash. Oh wait, hahaha. I mean rush to make dinner, rush to give baths, rush to bed and crash. Oh wait again, I mean rush to feed Henry, put him to sleep and then crash. And crash I did. For six hours. Wake up. Repeat.

But then yesterday as we were walking back from the bus stop, I could see that glassy-eyed look in Grace’s eyes. And her whining was spiking and her body was dragging. I reached over and felt her head. Just as I suspected — she was burning up.

Claire begged me to take her temperature, too. She deplored the idea of going to school while Grace stayed at home. I imagine that she was picturing Grace having a swinging-from-the-rafters, blowing-party-horns, eating-cake kind of day. Or maybe it was just the one-on-one Mom/Dad time she thought she’d be missing out on. But she was good to go — no fever.

Grace was distraught that she would be missing school — Fridays are library day and this would have been her first time. She cried for about 20 minutes because she didn’t want to miss it. Poor little school-loving chick.

But then we woke up this morning and Claire had that same glassy-eyed, body-dragging look. Just as I suspected, she had a fever, too. I wouldn’t be surprised if she begged Grace to breathe on her or something last night. I kid, I kid. Probably. She did announce that today was going to be "the best day ever."

To top it all off, Scott and I both went to bed feeling sick. I woke up fine. He didn’t.

So, after being off work for the entire summer I had to call in today as I managed 3/5 of our family being sick.

Thankfully, and completely unlike him, Henry took some monster naps today. Although now that I think about it, maybe that just means I’ll be looking at 4/5 by tomorrow.

Hang on while I go find my cape. 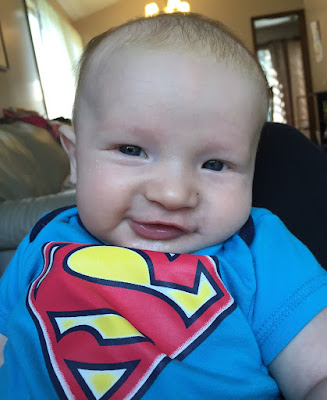