A Case of the Mondays

Today is most certainly Tuesday.

I know this because yesterday was most certainly a Monday. There is no way that my day yesterday could have existed on any other day than a Monday.

This weekend we fought the sleeping troubles.

But yesterday I reached my limit. She was cranky in the morning, but refused to take a morning nap. Then she nearly refused to take an afternoon nap, and it took both Scott and I and all of the tricks we know to convince her. 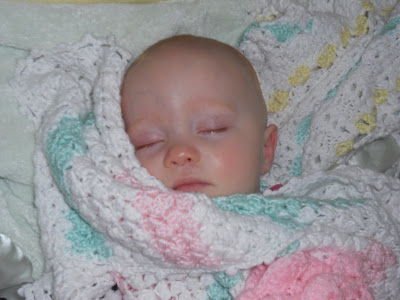 And even then, the nap was only for 45 minutes.

But then my fantasy took a turn for the worse when I realized the result could also be a baby who screamed while eating AND sleeping. I shuddered at the thought.

Scott and my mom figuratively slapped some sense into me, and I stopped fantasizing all together. Instead, I just thanked my lucky stars that I have such healthy, smart, lovable little girls.

Even if they do make my Sunday feel like a Monday.
Posted by Katie at 8:40 AM

I don't know when you took that picture, but I do know that it wasn't yesterday. I bet she looked pissed even when she was asleep.