Our fourth anniversary was approaching and we knew we could use a couple of days to rejuvenate. So we called up the rents and asked if they could stay the weekend. We headed to Kansas City for a three-day, two-night, baby-free adventure. It was full of ups and downs and many, many people dressed as pirates. But it was a weekend I won't forget any time soon.

Apparently, the hotel was hosting a conference for the weekend. A gaming conference. As in video gaming.

I'm not hating on video gamers. I have lots of friends who I love that play video games like it's their job. But if you are going to dress up like a pirate and walk around in a public place, you do so, knowing that someone may blog about you.

Needless to say, we spent a lot of time people watching.

This is the only picture that I managed to take. That's the statue mime. 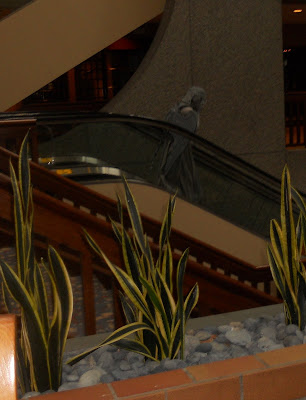 Email ThisBlogThis!Share to TwitterShare to FacebookShare to Pinterest
Labels: Vacation