I really screwed up yesterday.

If you're a West Wing fan, perhaps you remember Toby's rant from season 1 about tempting fate. That's what I did.
I tempted fate.
Yesterday, when conversing with some co-workers, I said two things that would come back to haunt me.
1) My girls sleep through the night and have since they were four months old.
2) When one wakes up screaming, they go back to sleep on their own within a minute and never wake up the other.
Fate 2, Scott 0.
Last night, Claire woke up round about midnight, which isn't altogether unusual. She has this thing she does where she cries out for 10 or 15 seconds randomly several times a night and then goes right back to sleep.
Surely that's what she was doing this time, right? Right?
Well, after a few minutes where that obviously wasn't working, Grace starts crying in a "Claire-why-don't-you-shut-the-hell-up-so-I-can-sleep" sort of way.
This is not a drill folks. We have a full-on, two-baby, middle-of-the-night wake-up. This is what we've trained for. And by we I mean Katie.
You see, I don't know how it happened, but we have developed pretty clearly defined roles in this whole parenting thing. Some of them are good allocations of responsibility, others aren't. This is one of the ones that isn't.
When babies wake up, Katie tends to them. Not because I'm not willing to or don't want to or anything like that. It just sort of happened.
And while I'm sure it's a burden she'd rather not have, there's a problem: she's really friggin' good at it.
So while Katie spent 45 minutes rocking Claire back to sleep last night, I laid in bed, wide awake, crossing my fingers so hard they were starting to cramp.
Obviously, my position is infinitely better than hers. She can't go to the bathroom. She can't get a drink. She can't blow her nose. If she makes one wrong move, she'll wake *it* up.
But I can't shake the feeling of complete and total helplessness. I can't go in to check on her, because that would wake Claire up. I can't bring her a glass of water, because that would wake Claire up. Not to mention being unable to help my screaming kid.
After what seemed like forever, Claire did finally go back to sleep (and stay back asleep) but the whole ordeal has given me a newfound appreciation for how awesome my wife is and a newfound reliance on superstition.
Next time someone asks me how my kids sleep, I need to come up with a better answer. One that doesn't tempt fate.
But, next time someone says to me "Wow, twins. How do you do it?" I know exactly what my response will be. 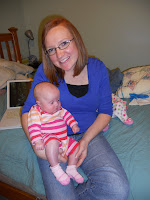 I love this post!! Good for you for saying how much you appreciate your wife, more husbands need to do this :) And Katie your post about the milk, yes I would say gradually integrate it or they also make formula now for babies over 1.