You have met my sister Cassie.

And my sister Carrie (sorta … more on her at a later date).

But I don't think you've been properly introduced to my brother, Johnny. 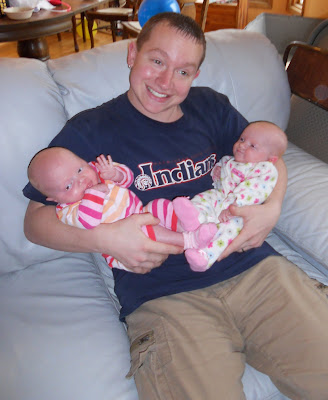 I love him to the moon and back, but he is a very straightforward person who tells it like he sees it, which at times can make you feel like you were just punched in the gut.

So, last week when I wrote a post seeking advice for Claire's napping problems, he very bluntly wrote this, "Let her cry herself to sleep. Period. You are enforcing a bad habit. It worked excellent for Bella."

I know he didn't meant to, but at first, it hurt my feelings. I started wondering if Claire's problems were because of something I was doing. Maybe I have screwed her up and she'll have lifelong problems soothing herself.

But then I changed my thinking. For Johnny, and probably many others, the crying-it-out-method works. In fact, it has worked for us before, too. When Grace cries out at nap time or during the night, she puts herself back to sleep within a few minutes.

But Claire is different.

We have tried method after method, including cry-it-out. She stood in her bed and cried off and on for an hour. Gagged herself. Made herself vomit. Had snot and tears and slobber everywhere. It was not pretty. And it didn't work.

But since I have them both at the same time, I'm able to see that my parenting style isn't what's dictating these girls' behavior. Does it have an effect? Absolutely. But at the end of day, Claire and Grace are exactly that. Claire and Grace.
Posted by Katie at 8:33 AM

Email ThisBlogThis!Share to TwitterShare to FacebookShare to Pinterest
Labels: parenting